You are here: Home1 / 2021 December2 / Notice of Officer Election and Update to Bylaws 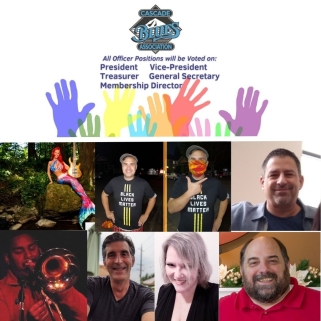 Notice of Officer Election
and Update to Bylaws

*Emails will be sent to the email addresses associated with all members in good standing as of November 28th to allow time for processing new memberships and renewals before preparing voting forms.

(Presented in alphabetical order by position)

Officer elections for the Cascade Blues Association are Dec. 2-16. I want your vote for Anni Piper as president in 2022. I’ve been a touring blues musician since my mid-20s, performing throughout Australia, Canada and 43 states in the USA. I’m an Australian Blues Music Award winner, former Blues Leaf Records artist (Janiva Magness, Albert Castiglia), IBC semifinalist and Road Dawg Touring act. I have a bachelor of arts in contemporary music from Southern Cross University and spent seven years as a high school classroom music educator. Throughout my career I have been a member of seven different blues societies. I joined the CBA immediately upon moving to Portland four years ago. I have been an at-large board member of the CBA for about six months, and a contributing writer for BluesNotes. My previous experience with nonprofits includes three years as a charity ambassador for Cristina’s House of Hope (Australia).

When I first started recording and touring, my husband at the time said “Anni, I know this is your hobby and your passion, but you have to run this as a business.” This was sage advice. The CBA must investigate alternative methods of funding if it is to continue to survive and thrive. I plan to secure continued funding for the CBA by hiring a professional writer of government arts grants. There are many of these grants available to 501(c) nonprofit groups. In the long run it will be well worth the investment of spending a little to gain a lot. Through this I hope to create new paid performance opportunities not only for our local blues artists, but also for touring acts. Recommencing physical distribution of BluesNotes is also a priority. Portland promotes herself as a progressive city, and I believe an ongoing focus should be diversity in the acts the CBA chooses to showcase.

James Thornton is a jazz and blues musician and dancer who has planned, developed, and executed music and dance events that bring musicians and dancers together. He is enthusiastic about bringing communities together as president of the CBA. James was the live music coordinator for Portland Blues and Jazz Dance Society from 2019 to 2020. He has 30 years of performance experience for music festivals, dance events and event planning activities. James has a deep passion for diversity and inclusiveness in the Portland music scene.

Robert Umali Evans has been in the Portland blues community for a long while, showing up to many a blues concert and dance over the years as a patron, volunteer and instructor, and organizing events himself as the owner of Portland Dance Studio. He is excited to steward CBA as vice president with energy and enthusiasm! Robert also sits on the board of the Portland Blues and Jazz Dance Society, serving as a bridge between the two blues-focused nonprofits. He prioritizes diversity and inclusion.

Passion. I’m musical, but don’t call me a musician. I think of myself as a student, which brings its own style of passion for the music! While my personal pursuit of music-making adds to my appreciation for the expertise and dedication of the musicians, I’m here to support the artistry (and business) of the entire blues community.

Skills. I bring with me a background in technology, media (traditional and social/electronics), journalism, executive leadership, marketing, promotion, project/event management, organizing/leading teams and networking. My skill set is best suited to helping the operations of the organization.

Nonprofit experience. Prior to joining the CBA board, I served as an executive officer at Rose City Yacht Club and as media relations committee chair commissioning the USS Portland, here at the Port of Portland, in 2018. I have also served on the board at large for the local chapter of the Navy League.

Platform. CBA faces a number of transitions simultaneously: diversity – in ethnicity, age and gender; promotion of the blues as an art form in the community; outreach to educational institutions and programs to support the blues; nurturing a thriving network of venues supporting a wide variety of local talent; increased support for performers, both local and touring; and a mandate to build a solid and thriving leadership structure with new people and perspectives. As vice president, I look forward to being of service, amplifying the blues within the association, with members, with the performers, in the media.

In her role as general secretary of the Cascade Blues Association for the past two years, Marie has found a way to combine her lifelong enthusiasm and love of live music with her administrative and organizational proficiency. Having spent decades collaborating in committees and boards, from nonprofits to governmental agencies to the corporate boardroom, Marie contributes to the stability and effectiveness of the CBA. She finds great satisfaction in being able to give back to the community, and her intention is to contribute to an efficient, dynamic organization that will not only sustain, but allow the blues music community in Portland to flourish, diversify and grow.

Some of the tasks and roles that Marie has taken on include introducing a communications strategy, location coordinator for board meetings, administration of CBA voicemail, emails and Facebook, 2020 Portland Parks & Rec Partnership (PVP) Committee and GoFundMe Campaign, graphics for website, Facebook and newsletters, BluesNotes contributor, event ticketing. She’s been a key instigator in co-chairing planning and diversity committees, and lead for the Best Self-Produced CD. Marie’s developing partnerships with POC-led organizations to expand the reach and exposure of the CBA into more diverse communities, and is booking performers for Blues Nights and membership meetings, with plans to expand.

I’m Mike Day and am currently the interim CBA treasurer. I have a master of public administration degree and currently work in public health IT management. For several years, I was the secretary/treasurer for a volunteer, nonprofit association based in California. I’ve been learning the CBA financial reporting structure and am starting work on developing a budget that will support the various initiatives being developed by the board. I look forward to being able to continue this work.

My name is Mike Todd and I’m the current membership director for the CBA. I’m organized, detail oriented, and have served on the board as membership secretary (now director) for the past two terms (2020-21). I was previously an at-large board member and vice president back in the 1990s. I’ve volunteered with various organizations in the Portland metro area for 30 years – working with homeless citizens, terminally ill children, low-income homeowners, and at-risk and incarcerated youths. I believe that volunteerism is the heart and soul of every community. I want to do my part to help keep music and the arts alive in my community because it’s those types of self-expression that generally reveal the collective heart and soul of our humanity.