You are here: Home1 / Ramblings2 / Ramblings On My Mind ~ Greg Johnson, CBA President

An icon of the Northwest music scene is gone, and it is hard for me to believe. For as long as I can remember Jim Mesi has been there. It’s much like with BB King — the thought was that they would be around forever. You knew that there were health issues, but you never actually thought that they wouldn’t survive those. Until it happened.

The Portland blues community didn’t start with the guys in Brown Sugar, but they certainly made it seem that way. It wasn’t Jim’s first band either. I remember sitting down with him many years back for a BluesNotes feature article. He told me his stories about Moxie and the trip to Los Angeles with the thought of becoming stars and a recording contract. About traveling to Europe with his band to play for the troops often in actual combat zones. There was Brown Sugar, the Paul deLay Band, his hiatus from Portland living in Seattle, and his return forming the long-running Jim Mesi Band that continued up until the time of his passing. 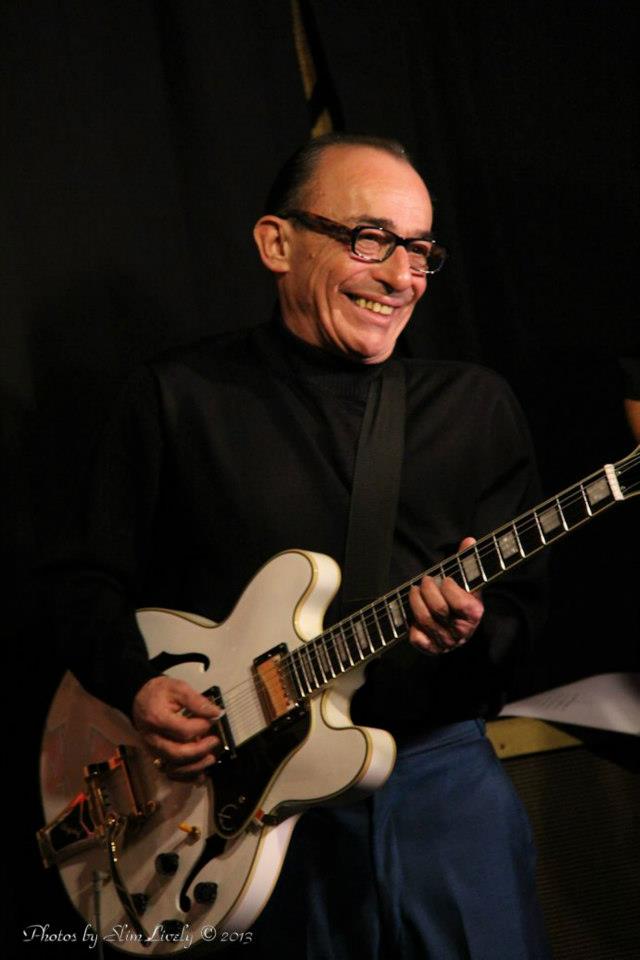 There are not many clubs in Portland, past or present, that it seems that I hadn’t seen Jim play at one time or another. He had a way with a guitar that was unrivaled. I don’t think that I ever heard him do the same solo more than once. Not many guitarists that I can say that about, the only other people off the top of my head with that type of creativity would be Chris Cain, and maybe Bugs Henderson. Mighty fine company there, Chris, Bugs, and Jim. Like many of my musician friends from around the country he never called me Greg. A lot of them call me Slim from my photography persona (just too many people named Greg Johnson, so I use Slim Lively). But with Jim it was always Mr. Johnson, no matter what the setting, private or on stage. And he gave me one of the my most proud accomplishments as a photographer by using a photo of mine to grace the cover of his I’m Ready CD.

The news of his death came to me like it did to so many others. A message sent to me on my phone. A sudden expression of shock at the news. It was the same feeling I had when I was informed of the deaths of Paul deLay and Janice Scroggins. With deLay it came by a phone call early in the morning. It was a text with Janice just like with Jim. All three caught me off-guard. I guess it is the way things are nowadays, with social media being damn near instantaneous. I guess that may be the reason why when I put out word to a group of people about the tribute to Jim in the BluesNotes I wanted to put together, not everybody responded. When I did this for Paul it had to be spread out over two issues, one local artists and one national. So many people wanted to share their thoughts. But there was no such thing at the time as Facebook. People can now make their memories and thoughts conveyed at the spur of the moment it comes to them. I also realize that many may not have responded because they aren’t able to talk about the loss of a close friend and peer just yet. I can accept that.

I hope that the memories of those included in the paper can share a little bit extra about Jim and who he was. Not just as a musician, but as a friend and somebody they felt was as close as family. I wish that we had more space in the BluesNotes. I would’ve put the word out to everyone to share their stories and thoughts, but I reached out to a small handful knowing the limitations we have. I hope that everybody who knew Jim or maybe just his music will have the chance to attend one of the two Celebrations of Life scheduled in April. Gather with those who share your admiration and love for Jim Mesi. Tell one another your own special stories. Everybody who knew him will have something to say. We lost one of the best. Goodbye Jim, may you forever create new licks that will enchant everyone in the hereafter. And I’m sure you’ll still be dressed in the finest matching outfits, shiny Italian shoes, and playing those LED-lit guitars. You’ll always be playing within my mind whenever I think of you and it will always make me smile and hear your sharp laugh. Or was it just the grizzled “HA!!” that brought us all along with your humor. Going to miss you Mr. Mesi.

Thank You Squrl
Scroll to top