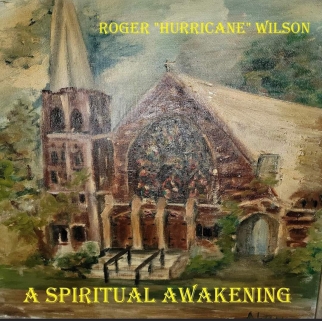 Roger got his “Hurricane” nickname from decades of scorching blues guitar riffs as he performed and taught guitar for more than 50 years.  Behind him are over a dozen studio and live albums/CDs, mostly released by Blue Storm Records as well as thousands of live gigs.  I’ve always loved the way his Johnny Cash cantor in his singing played deeper than most of his contemporary blues singers but proved to be a signature that many others have copied.

Roger has worked all over the spectrum of musical life from being on the Advisory Board of the Georgia Music Industry Association to a judge at the International Blues Challenge to radio DJ to an educator to music journalist.  Through everything, his namesake has always let listeners know what to expect in his guitar style whether in the studio or on the stage.

Roger has stood toe to toe with the likes of Albert Collins, Les Paul, Stevie Ray Vaughan, Magic Slim as well as Taj Mahal, Little Milton and B.B. King, just to name a very few that I remember and saw in my research.

As the story of Robert Johnson starts with an unassuming blues guitarist with a fire in his soul making a deal with the devil, Roger’s story goes the opposite way.  His latest CD, “A Spiritual Awakening,” is the product of a lifelong search that many of us have had or are going through.  A lifetime in the blues tends to test one’s moral compass.  In the 30 years that I have seen Roger play and interact with other musicians and fans, whether he knew it or not, his moral compass always leaned in the right direction.

Brenda Lorenz’s article about “A Spiritual Awakening” in Beat Atlanta Online Magazine relates that Roger is trying to spread some positivity with this latest offering. She talks about someone who influenced Roger early in life, and that well describes how Roger became a man who shared his talent and gave unselfishly to other musicians and fans alike:

“The ‘Awakening’ begins with the beautiful artwork that adorns the cover of this album.  This is the All Saints Episcopal Church in Midtown (Atlanta).  In the early ‘60s, Fannie Mae Alonso, Roger’s grandmother and acclaimed Atlanta artist, created this inspiring work of art.  She is also credited for inspiring Roger to pursue his dream of music.”

Roger also has an autobiography called “Hurricane” (http://hurricanewilson.com/the-book-hurricane/), in which he shares with readers his experiences as a 6-year-old taking guitar lessons, through countless live performances and how the music and his life intermingled for the next 50 years.

You all know I’ve only been with the Cascade Blues Association for a few months and I am learning more and more about this wonderful group.  Many blues associations are pretty stuffy about sticking to the old Mississippi Delta or Chicago bluesmen and women PERIOD.  As I discussed the possible inclusion of this review, I was pleasantly surprised to hear that the CBA is willing to open its wings to all of the types of music directly under the blues umbrella extending to its fringes.

From the opening tune, “It’s Gonna Be Like That,” you are immediately hit with that same bluesy smooth voice.  Roger’s guitar work takes a different direction than all of his other discs and live performances.  His 50 years of blues always finds its way into each of the originally penned and arranged songs on the CD.   But this CD seems to be a tribute to Fannie Mae Alonso as well as an homage to the peace he has found. These tunes also seem to document the stormy road through the blues that provided so many trials for Hurricane over the years.

It was a really nice surprise to open my mind to the unexpected subject matter which holds this CD together.  It was no surprise to hear the stellar vocals and guitar that Roger has been nurturing since he was 6 years old.

Roger lays his heart bare for the listener… something you don’t really get too much anymore.

It’s Gonna Be Like That / God Works in Wonderful Ways / You Can’t Do It Alone / New Lease on Life / Turn It All Over to Him / Lord You Really Made My Day / Thinking Positive / Lord Knows / Everything’s Gonna Be OK / I’m On Your Side.

Get to know the Groovetramps