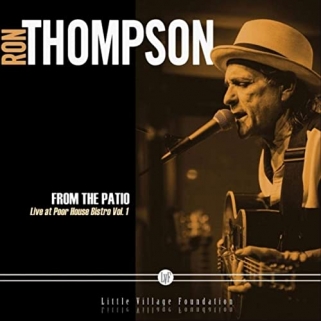 From The Patio: Live At The Poor House Bistro, Vol. 1
Little Village Foundation

Bay Area favorite, guitarist Ron Thompson, may have passed on earlier this year, but thanks to the folks at Little Village Foundation, we have this terrific live recording from San Jose’s Poor House Bistro that will continue to allow us to enjoy his music again. Holding a fourteen–year Wednesday night residency, these songs were picked from two nights in 2014, the masters were mixed by Kid Andersen atGreaseland Studios, who also produced the album and plays on a couple tracks himself.

Thompson’s guitar work really shines, as it should. The man was among the first-call West Coast players having worked with John Lee Hooker, Little Joe Blue, Big Mama Thornton, Etta James and Lowell Fulson as well as many others. With a natural ability on both finger and slide guitar styles, Thompson could supercharge an audience with electrifying, energized and even haunting performances; all displayed on the selections offered here.

Covers of Don Covay & Bobby Womack’s “That’s How I Feel,” Lowell Fulson & Lloyd Glenn’s “Sinner’s Prayer,” Willie Dixon’s “Meet Me In The Bottom,” Lightnin’ Hopkins’ “Bring Me My Shotgun,” and Buster Brown’s “Doctor Brown” are all delivered with excitement and passion. A trio of his original numbers, “Mardi Gras Boogie,” “The River Is Rising” and “When You Walk That Walk” showcases his own prowess at songwriting. The entirety of this collection is excellent and well delivered.

Ron Thompson may no longer be with us, but his memory will live on with recordings like these. The title states volume one, let’s hope for more yet to come.