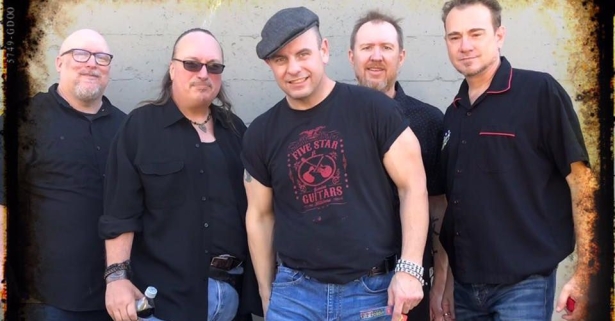 Raising funds to send The Sugar Roots to Memphis in January 2022 to represent the CBA and the PNW in the Blues Foundation’s International Blues Challenge.

This band was forged from the roots of Portland’s uniquely prodigious local blues scene with three Portland natives and two extremely talented transplants who appreciate the legacy of Portland’s musical history and the amazing musicians who have provided a lasting tradition of blues performance. Sugar Roots draws on inspiration from Portland greats like Curtis Salgado, Lloyd Jones, Jim Mesi, Paul deLay, DK Stewart and Norman Sylvester, along with their supporting bandmates.

The band’s name is a nod to a popular local blues band, Brown Sugar, a pioneering staple of Portland’s live music scene.

Here’s what frontman Chad Rupp says about the band’s formation:

“Really, the band came together because we had been playing together regularly pre-pandemic for a few years at a popular local jam session, The 1-4-5 Blues Jam Party, and we were having a great time!

“Sam Gendler and Chandler Bowerman brought their experience and mojo from the LA and Illinois scenes, combined with veteran local and national act musicians Timmer Blakely and Jason “JT” Thomas. This group really became a tight and organic unit for me to work with.

“When we looked at the chemistry we had, we decided that we should be recording and gigging together more! These guys have made it possible for me to stretch out on stage leading to some fun and powerful performances for me, personally!“

Tas Cru – Broke Down Busted Up
Scroll to top