You are here: Home1 / 2022 January2 / The Blues – The Authentic Narrative of My Music and Culture 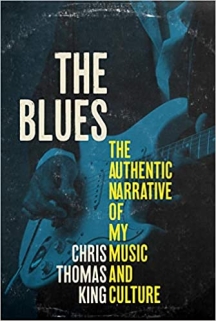 The Blues: The Authentic Narrative
of My Music and Culture,

In his new book, “The Blues: The Authentic Narrative of My Music and Culture,” Chris Thomas King sets out on a mission to restore New Orleans to its rightful position as the true birthplace of the blues, and he doesn’t much care whose toes he steps on to do so — white racist musicologists, greedy record producers, even African-American musicians like W.C. Handy, whom, although he doesn’t use the word, King accuses of collaboration in the historical theft of this music. It’s a difficult book and a tough argument to swallow clean, but given the recent attempts to reassess and revise America’s relationship with its racist past, it’s an important book nonetheless. And, as William Faulkner wrote in his novel “Requiem for a Nun:” “The past is never dead. It’s not even past.” This book provides searing truths that support Faulkner’s observation.

King’s thesis is easy enough to grasp: The blues is not, as the common belief holds, a product of the Mississippi Delta; its true lineage descends from Black Creole culture centered in and around New Orleans during the late 19th century. Its creation owes nothing to the Mississippi Delta, or as King puts it, its slave culture — that narrative is false, the creation of white sociologists, academics, musicologists and folklorists who attempted to dilute the meaning and power of King’s authentic Creole blues heritage to make it acceptable to white, middle-class Americans through associating the music with the stereotypical images of primitive Black slaves. King then takes his claim a step further by arguing that “[w]hites rebranded New Orleans blues, which preceded blues from the Mississippi Delta by more than two decades, [as] “Dixieland jazz” in the early 1900s.” Like I said, it’s a tough argument, but one resting on solid historical footing.

King begins his narrative in a river delta, though not in Mississippi — in Egypt. He argues that it is in the Nile River Valley where the true origins of the blues reside, mostly due to the Egyptians’ creation of its requisite musical instruments. King insists that the “[p]rimogenitors of New Orleans blues instruments such as Louis Armstrong’s trumpet, Sidney Bechet’s clarinet, Lonnie Johnson’s guitar, Warren ‘Baby’ Dodd’s drums, and Jelly Roll Morton’s piano, and even the second-line tambourine man’s percussions, can all be traced back to ancient Egypt.” For instance, he offers as proof, as least as far as Armstrong’s trumpet goes, the sheneb, a bronze “trumpet” (c. 1340 BCE), two of which were found in Tutankhamen’s tomb in 1922. King describes these horns as “long and narrow with a protruding bell.” The problem with this analysis is that most ancient cultures used some sort of horn-like instrument in their rituals, (Scandinavia’s “Lurs” dates from the early Bronze Age, so too the Jewish Shofar and some ancient Chinese horns) and singling out the sheneb as the ancestor of the modern European trumpet seems disingenuous and unnecessary; the sheneb is an ancestor, not the ancestor of Armstrong’s trumpet. And besides, a horn is not a trumpet, and King admits it was Europeans who added valves to horns. But King’s point is that classical European musical achievements owe a debt to Egypt, and indeed he’s right, but they owe a debt to many other cultures as well. Overstating the role of Egyptian culture in the creation of Western music traditions threatens to undermine his larger, more crucial arguments.

King systematically upends the prevailing myth that the blues was the product of slave narratives and experiences in the Mississippi Delta. He wholly rejects the “cotton field holler” and what he calls slave “work songs” as having anything at all to do with authentic blues. According to King, “[s]lavery was, no doubt, a part of African-American history. It’s crucial to understand, however, the culture of the enslaved was not authentic African-American culture. Indeed, a people must have agency to form a truly authentic culture.” This is a complicated assertion since much hinges on how we define “agency,” “culture” and “authenticity.” There’s no question that Black slaves suffered ghastly mistreatment at the hands of their overseers, but to label their artistic attempts to weather this dreadful treatment as not an “authentic” culture strikes me as absurd, and to further suggest that all enslaved people suddenly lose the ability to form artistic expressions of value since they possess no agency is doubly so — tell that to the Jews who suffered during their Babylonian exile, the Irish under English rule, or America’s Native tribes. King’s zeal to reclaim New Orleans’s Creole culture as the proper source of the blues demands that he diminish any association the Mississippi Delta, and slavery, might have with the origins of the music, even to the point of denying enslaved African-Americans a legitimate culture.

King’s argument shines brightest when he engages in a scathing evaluation of the wretched and wholesale racism that infected nearly all of American culture of the early 20th century and that subsequently led to the appropriation and recasting of African-American music for a white, mainstream audience. Even the language used to market the music fell victim to this racism. King shows how the development of the words and phrases like “jazz” and “Dixieland jazz” replaced New Orleans “blues” and made it more palatable for the established (read European) culture. King argues, and I think he’s absolutely right here, that what we historically call “jazz” is the sure offspring of late 19th century New Orleans blues, albeit hidden under several layers of racial varnish. As King succinctly contends: “It will offend many jazz musicians and devotees to hear me say that jazz is a misnomer for blues. However, if they follow the contemporaneous primary evidence provided by the pioneers themselves, not the distortions of their critics, they will be forced to accept the truthfulness of my assertion.” Indeed.

This is a rich book dealing in a tricky subject and pushing back against more than a century of musical deception, misleading characterizations and pernicious racism. It’s also timely, coming along as our country grapples with its bitter history of prejudice and racial strife. But it’s also not without its flaws. Its tone is often unnecessarily hostile and the book suffers from some rather indifferent editing, for instance, confusing the word “phycological” (which refers to the study of algae and seaweed) with “psychological.” There are also numerous unfortunate and distracting grammatical and factual errors (e.g., Charlie Musselwhite, who was born in January 1944, is not a baby boomer).

King’s book is ripe with so many provocative ideas and exhaustive history that there’s simply not the time nor space to cover them all here. King has included 13 pages of quite extensive endnotes, and the entire second half of the book is devoted to King’s autobiography along with biographical sketches of various musicians, and these are largely terrific.

Joseph Epstein once remarked that “one of the things that makes the past so wonderful is that it cannot, finally, be recaptured.” The past, including its residue of bigotry and discrimination, hides behind a shroud of allegory and parable, and this is true here. In the end, though, I see the blues as not unlike baseball: each has an undefinable, mythic element, especially so when we begin to investigate their origins, and I’m not sure that mystery is an entirely bad thing.

This is an important book I unreservedly recommend, and anyone who reads it will come away with a better understanding of the complicated history of the blues, or jazz, or whatever we want to call this music. I know I will not listen to the blues again with quite the same ear, and I imagine a fine final gauge for the success of any book is whether is leaves its readers enlightened when they’re finished.

The Blues: The Authentic Narrative of My Music and Culture