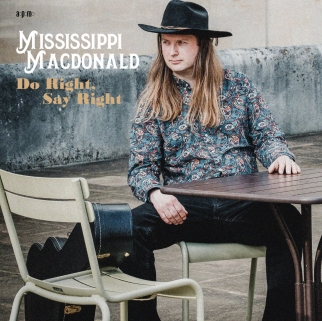 Fortunately for the listener, Mississippi MacDonald isn’t trying to sell us the tasteless generic recipe of his namesake. A young British blues sensation, but one with plenty of experience, this is his sixth studio album. It’s bump-and-grind blues from beginning to end from this vocalist, guitarist and composer. MacDonald certainly has a way about him — just take a listen to the saucy “Let Me Explore Your Mind.” I must say I find the prospect of some nice gentleman asking me about my fantasies far more alluring than the usual bluesman suggestion of “Why don’t you come over here and check out my little red rooster?” Or even worse, “Squeeze my lemon.” Spare me, please.

Back to the bumping and grinding for a moment. In “Your Wife Is Cheating On Us,” the only cover song on the album, MacDonald righteously belts out the Denise LaSalle (Little Milton for the male gendered version) classic. But honestly, why get uptight about it? According to the 2012 National Survey of Sexual Health and Behavior conducted by Indiana University School of Public Health, 4% of Americans are in a polyamorous relationship of some sort. Maybe MacDonald just didn’t lay out the ground rules to his girlfriend in a clear and succinct manner. Many relationship misunderstandings can be avoided this way, but then I suppose we wouldn’t have any blues emotions and situations left to sing about.

One element I must applaud is the use of dynamics in tracks like “If You Want a Good Cup of Coffee.” This is the first album I’ve listened to in a while that doesn’t just plod along at the same volume throughout. A tight band is given great direction by keyboardist, engineer and producer Phil Dearing. This is an excellent release, but if I were the Fairy Godmother of the Blues and could change just one thing with a wave of my magic wand, I would drop in a real horn section instead of using Dearing to take on this role. As one who has personal experience selling ice to the Eskimos, you had better make sure the ice has no cracks in it.

The Blues – The Authentic Narrative of My Music and Culture