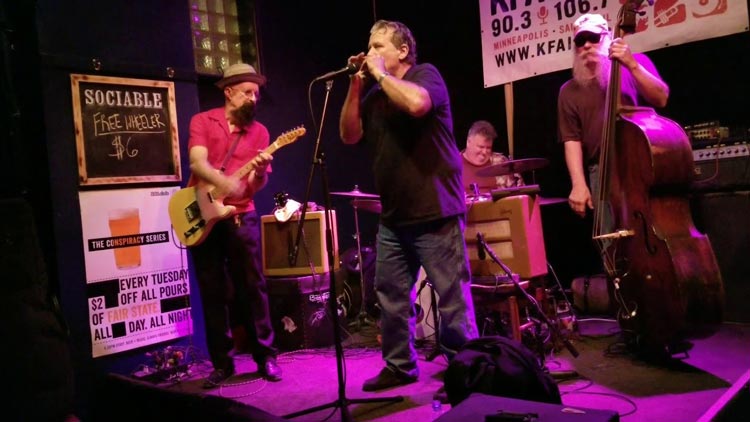 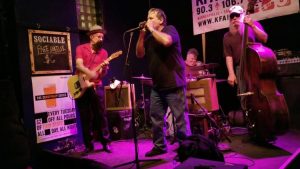 The Lake Theater & Cafe is honored to welcome for the first time “West Coast Toast” featuring Mitch Kashmar, Junior Watson, and Jimi Bott on Monday, September 3. All three are widely recognized as some of the best musicians in the blues business and as masters of the jazzy, West Coast Blues sound.

Mitch Kashmar has multiple BMA nominations and is a Hall of Fame Muddy Award winner for best harmonica player. He toured internationally with WAR for six years and has shared the stage with some of the most influential blues musicians including John Lee Hooker, Big Joe Turner, Willie Dixon, Junior Watson, Charlie Musselwhite, Stevie Ray Vaughn, Eddie Cleanhead Vinson, Kim Wilson, Pinetop Perkins, and many others.

With nearly thirty years of experience, Junior Watson has reached cult status and has done what all great artists do — meld diverse musical styles to create a unique approach to the blues. His artist resume is large and impressive. A founding member of The Mighty Flyers, he stayed with the band for ten years. and then left to join Canned Heat for ten years. He then toured for a while with LA-based harmonica player/vocalist Lynwood Slim. All along the way he has backed up and recorded with the who’s who of the blues, including illustrious artists such as Big Mama Thornton, George Smith, Jimmy Rogers, Shakey Jake, Luther Tucker, Charlie Musselwhite, Kim Wilson, William Clark, and more.

The 2015 Blues Music Award for drummer of the year went to Portland’s own, Jimi Bott, an award for which he’s been nominated a record 19 times. Jimi has received so many CBA Best Drummer Muddy Awards that the award is named for him, and he is also a member of the Oregon Music Hall of Fame. With over 100 CDs in his discography and a member of some of the greatest traditional blues bands, including Rod Piazza & The Mighty Flyers, The Fabulous Thunderbirds, and The Mannish Boys, there is no one better or more qualified in the world to bring the old school blues drumming to this show.

Show time is 7:00 pm, and as this performance will likely be a sell out, you’re encouraged to purchase tickets in advance at Laketheatercafe.com $20.00 general admission / $100.00 VIP tables closest to stage, seating four. The Lake Theater & Café is located at 106 N State Street in Lake Oswego.

Johnny Wheels and The Swamp Donkeys

Rick Estrin & The Nightcats Bring Their California Cool Blues To The Albert...
Scroll to top