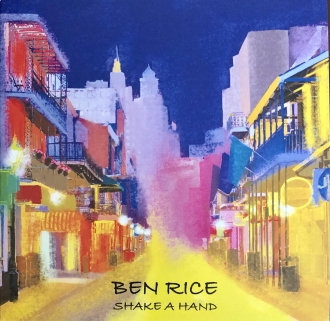 Ben Rice’s latest album is called “Shake a Hand,” and you’d best shake a leg and get your hands on a copy.

Recorded by Keenan McRae in New Orleans and engineered by Jimi Bott at Roseleaf Studios here in Portland, this six-song collection is a definite keeper.

The tone is true, and it proves up Rice’s liner note introduction: “This recording originated during a late-night jam session in New Orleans. Finding myself in the Crescent City, I chose songs with roots to that magic place.”

With the insistent rhythms of Rice’s guitar, Kennan Shaw’s bass, Ben Partain’s keyboards and Eddie Christmas’ drums, the album warms to a low simmer with “Big Legged Woman” and “Got My Mojo Working.” Then it heats up to a slow boil with “Mojo Hand,” which cooks with Rice’s slide work and Mitch Kashmar’s harp.

Specialty appearances add tasty spices to the gumbo the band’s stirring on this one. In addition to Kashmar’s harmonica on “Mojo Hand” and “Got My Mojo Working,” Saeeda Wright’s soaring voice adds extra lift on “Peace Will Overcome” and the title cut. Bott’s percussion, meantime, also adds nicely to the mix.

“Shake a Hand” features some satisfying organ, bass and guitar solos that power a soulful song that suits the mood and style of New Orleans.

This is an album that’s true to tradition, but open to new ideas and interpretations. But at it’s core, it’s all blues.

Like we said, you’d better shake a leg and get hold of “Shake a Hand.”