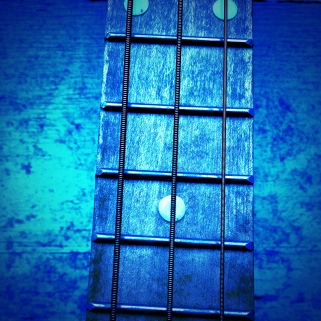 Five years ago, a couple of Dutchmen — who’d sung, played, produced and promoted the blues for more than a quarter of a century each — holed up with a guy they describe as “a mysterious singer hailing from the Deep East of Holland.”

From that shadowy gathering of Jan Mittendorp, Mischa den Haring and the singer, John Blake, an EP has arisen. And with the release of “Blue ACiD feat. John Blake,” it’s as if the spirits of the Mississippi Delta have returned with a message for blues lovers of today.

That message? American roots music is still very much alive, evolving and thriving as it absorbs new influences and technologies.

“Like moonshine,” a release from Blue ACiD says, “this music was slow brewed in seclusion during all-night-and-day marathons attended only by the two members and the ghosts of the past, who were eager to have their voices echo into the modern world.”

The modern world had better be listening, too. This four-song collection is a playlist of blues as authentic as anything released this side of the graves of Robert Johnson, Muddy Waters or Howlin’ Wolf.

Two tracks – “Georgia” and “Gallows Tree” — could just as well have been among the songs Alan Lomax recorded when he toured the Mississippi Delta in the 1950s, documenting traditional work songs.

The other two – “Keep It Burning” and “No Time” – bring the kind of heat you’d expect at a house-rocking Chicago blues joint.

With the raw power of Blake’s voice and the measured musicianship of Mittendorp and den Haring, the boys of Blue ACiD are making good on their goal of “preserving the power and originality of American roots music but at the same time not excluding influences from any other musical styles nor any technology that is available today.”

Somewhere deep in the Delta, spirits are kicking back and resting easy.

Alex Maryol – In the Meantime
Scroll to top