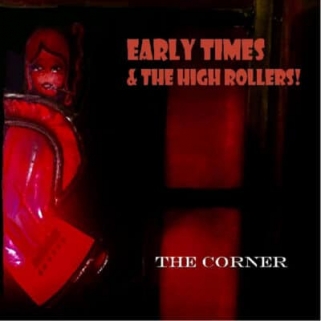 Blues guitarist Early Times started his career working in Northern California joining up with artists like Johnny Heartsman and EC Scott. He is also known for hosting a show on Sirius XM’s BB King’s Bluesville station. With a handful of recordings since 1990, Times is releasing The Corner, his first disc since 2017’s Hit & Run.

Early Times has a knack for writing descriptive stories filled with eclectic characters, which can easily be seen in his lyrics on the new album; perhaps most vividly in the track “Do What She Do” populated with people like Mary in the Cha Cha Hat. He is not a guitarist that puts too many notes within a song; just enough to give the right edge to deliver his music and he shows this in the instrumental number “Rosie’s Herbs N’ Things” and the jazzy “Say, Man.”  But less notes does not mean that he’s a lesser guitarist. On the contrary, he knows exactly what is necessary to bring the perfect mood and flow for each number. There is a nice string-work interaction by him and guest Popa Chubby on “She’s About To Lose Her Mind.” There is also a nice jump of stylings between the songs, as you have rockin’ tracks like “Charmlemagne,” a Bob Dylan-esque feel to the closer “Return Of The Queen” and a slower acoustic piece “Someone Help Mary.”

Overall, The Corner is a fun trip to make to escape the every day distractions happening in the world. Early Times will take you in with his all original views of life and the people who live within it. Musically this is a terrific disc, packed with great vocals and stories, and produced by the amazing Jay Messina. Recommended!!