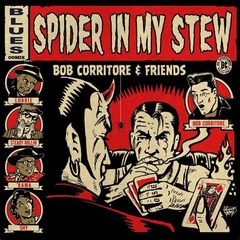 Spider in My Stew
VizzTone

First is Shy Perry’s sinewy rendition of “Wang Dang Doodle” that tears off like a bourbon-fueled  and makes this old blues warhorse sound as if it’s brand new — no mean trick. It echoes Koko Taylor’s famous version, ups the ante a bit, and avoids sounding derivative. Next up is a cover of Muddy Water’s “Soon Forgotten” that includes a dazzling mixture of Corritore’s stirring harp, Fred Kaplan’s fertile piano and Willie Buck’s throaty moan. But it’s Mr. Rayford who, as usual, threatens to steal the show. In his “Big Mama’s Soul Food” Sugaray lays out a potent soul-food shuffle accompanied by Corritore lethal Hohner harmonica and Kid Ramos’ rough-hewed guitar licks. It’s tasty and mouthwatering and completely marvelous.

Corritore manages a nice balance of gritty, Chicago-style blues—both old standards and newer, less well-known tunes. The one misstep is Bob Dylan’s “I Shall Be Released,” which, coming at the end of the recording, seems like an afterthought. The problem’s not with the musicianship, it’s first-rate, or with Francine Reed’s fervent vocals, no. It’s that “I Shall Be Released” simply doesn’t fit in with the texture of the album. Beyond this, though, it’s such an iconic song that any recording will struggle to escape The Band’s definitive version lurking in the background like a specter.

But this is merely a quibble. This is an album that contains some serious musical chops and boatloads of fun. Highly Recommended.

Eddie Turner – Change in Me

Save the Date – The International Blues Challenge #37
Scroll to top