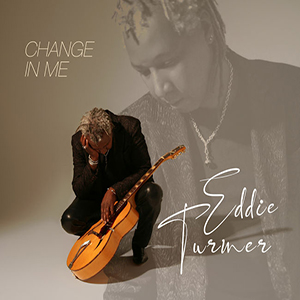 Change in Me
7-14 Productions

The way he delights in stirring up styles and mixing in melodies, you could see Eddie “Devil Boy” Turner as some kind of musical sorcerer. He summons blues and rock songs from the deep past, puts them under his spell, then transforms them at will.

But he leaves their spirits whole as he conjures up new creations of his own.

With “Change in Me,” the fourth solo album from the former member of Otis Taylor’s outfit, Turner breathes his mojo into classics popularized by the likes of Muddy Waters, Lou Reed, Taj Mahal and Jimi Hendrix.

Turner’s guitars – sometimes shimmery, sometimes shadowy, often ethereal — guide the album, and he gets some help on vocals from Passarelli and Jessie Lee Thetford. Passarelli also provides bass and keyboards, while Neal Evans plays the Hammond B3. Evans, Dean Oldencott and David Brenowitz team up on drums.

The Cuban-born Turner, who grew up in Chicago and started playing guitar at age 12, has pulled off a magical work here. The expressiveness and versatility of his voice can send chills down your spine, and his effortless guitar work infuses the songs with a subtle sophistication you might not appreciate until your third or fourth listen.

He handles the covers reverently, but experiments with new sounds with the kind of fearless abandon that comes only after years of apprenticeship and practice.

His 10-year run with Otis Taylor – who gave him the “Devil Boy” nickname, reportedly because Turner used to push Taylor’s patience to its limit – is evident on “Change in Me.” But it doesn’t define it.

Turner’s an artist who’s following his own muse and taming his own creative demons.

“Change in Me” is a change for the best. It’s music you’ll definitely want to own – but beware: It might be in your possession, but it will possess you.

Change in Me / Dignify Me / My Friend / This Is Your Night / I’m Waiting for My Man-She Caught the Katy / Standing on the Frontline / Another Sign of Weakness / Whoa, Whoa, Whoa / Let My Soul Run Free / Hoochie Koochie Man

The Blue Quarantinos – Phoning It In

Bob Corritore – Spider in My Stew
Scroll to top