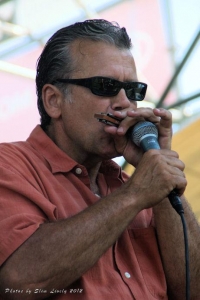 The new year is rolling forth, but the pandemic doesn’t seem to be letting up anytime soon. But the Cascade Blues Association and Artichoke Music are not going to slow down as we plan on bringing a special night featuring a pair of the West Coast’s finest blues musicians: Mitch Kashmar & Terry Robb.

Mitch Kashmar is renowned as one of the premier harmonica aces who have made their mark on the Left Coast following a long line of masters like George “Harmonica” Smith, William Clarke, Kim Wilson and Paul deLay. From his beginnings in the early ‘80s fronting his band The Pontiax, Kashmar’s reputation continues to grow, with a successful solo career with multiple superb recordings, to a short stint blowing harp for the rock band War. He has garnered two Blues Music Award nominations and repeated Muddy Award wins for best harmonica and induction into the CBA’s Muddy Awards Hall of Fame.

Terry Robb is a West Coast legend. Considered one of the premier acoustic guitarists performing today, he is just at home on the electric. His technique is fluid and precise, with string work that is dazzling to behold and a pleasure to listen to. He has played in the Portland area for decades and has received induction into the Oregon Music Hall of Fame. With the Cascade Blues Association he has won so many Muddy Awards, including more than 20 straight years taking home the Acoustic Guitar Award that his name now adorns that award, retiring him from the field. But that does not stop him from other categories, as shown with his 2019 recording, Confessin’ My Dues, which won the Muddy Award for Northwest Recording of the Year. It also received a nomination from The Blues Foundation’s Blues Music Awards for Acoustic Album of the Year.

When you team up two artists of such high caliber, you know that sparks are going to fly from the Artichoke stage. Join us at Artichoke’s Facebook page at 7 p.m. Wednesday, Jan. 6. Share the event, let all your friends know, and please tip the band.

Join in and go to the Mitch and Terry’s online payment sources to help these fine musicians make ends meet during these trying times of limited performance opportunities.

You can also join or donate to the Cascade Blues Association and Artichoke Music (both are not-for-profit organizations).
www.cascadebluesassociation.org
www.artichokemusic.org

***special note to CBA Members…watch for the January newsletter to find instructions on how to win CD’s during the live stream!