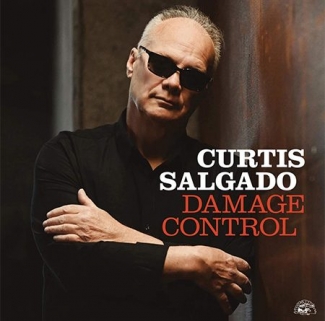 When I first began to listen to Curtis Salgado’s new release, “Damage Control,” it only took a couple of bars from Jim Pugh’s stout piano and Mike Finnigan’s sparkling organ to hook me completely. I hear a lot of new music, but during the last few years there have only been a couple of albums that immediately took off the top of my head. Shemekia Copeland’s “America’s Child” was one. So too was Ole Firmer’s “Live in Appingen.” But now there are three. Salgado’s combination of fervent, rough-hewed vocals, kick-ass bandmates, and splendid songwriting has produced an album that moves effortlessly from rock-infused blues and ‘50s-inspired rock ‘n’ roll to soulful R&B and lovely gospel — all of which Salgado neatly wraps up in sardonic, and often elegiac, lyrics. This is an album of superb musicianship, but it also has a vast, doozy of a heart.

Frankly, while writing this review I felt like a man splitting firewood with an icepick — I wasn’t sure I had the right tools for the job. There’s a sublime character to this album that’s difficult to describe. Any musician can play with feeling, but it takes something else, perhaps just potent insights into the nature of the human heart, to take music beyond mere feeling. Whatever that thing is, it’s here in spades.

There’s hardly a single dud on the record. Things start out with “The Longer That I Live,” an up-tempo tune steeped in a rock groove with Kid Anderson’s tasty guitar licks weaving around and through Pugh and Finnigan’s keyboards. It’s a stunning start to the album. Two other tunes deserve highlighting: “Always Say I Love You (At the End of Your Goodbyes)” and “You’re Going to Miss My Sorry Ass.” These two songs set the stylistic margins for this heady musical mix; the former a restrained, poignant plea to never assume loved ones will be here tomorrow, the latter a boisterous, pungent warning that one should take care when selecting those loved ones.

Not sure what else there is to say about this terrific recording but to point out that any album that delves into the career of Julius Caesar (“Hail Mighty Caesar”) easily crosses the Rubicon on its journey to musical nirvana. Go buy this album now.