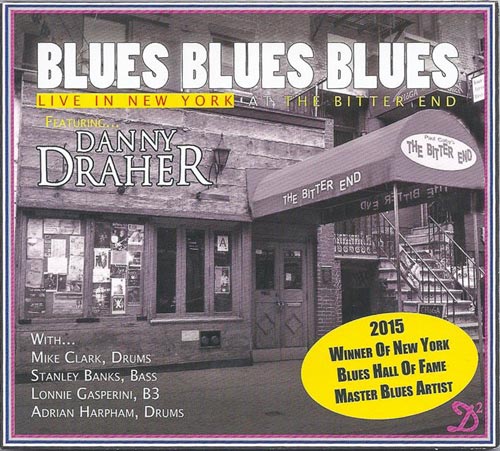 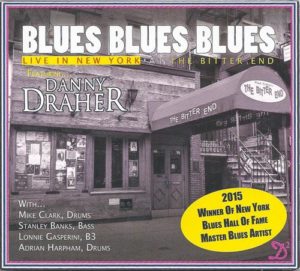 Danny Draher is an accomplished international blues and jazz musician. Starting out in Chicago, at Chess studios, Danny has recorded and toured nationally and internationally with Dr. John, Etta James, Paul Butterfield and Allen Toussaint.

I had the chance to see Danny at the 2017 International Blues Challenge, and brought home his latest release.  This recording features a stripped down four piece combo with Danny on guitar and vocals, Stanley Banks on bass, Lonnie Gasperini on the B3 organ, with Mike Clark and Adrian Harpham on drums. Danny composed and arranged all the songs, and the CD was recorded with excellent sound quality live at the legendary Bitter End in New York City. The guitar has a rich tone, with just the slightest overdrive. The vocals are clear and bright.

These original compositions are pure modern blues with a sultry fell. “Going Home” and “My Desire” have a swampy feel reminiscent of Tab Beniot. “Disco Woman” is my favorite with an extended B3 and guitar solos. The audience liked it quite a bit — you can hear them cheering — and this is one of the few spots on the CD where you actually hear the audience, but only cheering, no talking or clinking of glasses. “Don’t Know Much” is a slow and sultry instrumental that harkens back to the Chess days. “Big Fun” picks up with a shuffle featuring Danny scat singing along with the guitar. The CD closes with a pair of instrumentals. “Love For You” is the jazziest selection on the disc, and is the perfect blend of B3 and guitar.

If you make it to the east, be sure to look for Danny. His CDs are available on his website and at his shows. http://www.dannydraher.com