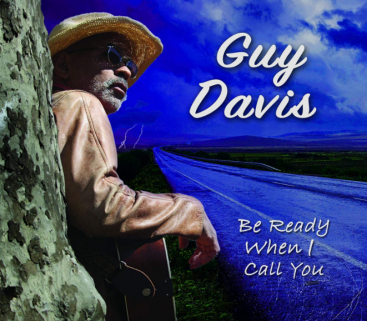 Be Ready When I Call You
M.C. Records

List your favorite records, your musical top-10, regardless of genre, and ask yourself what they have in common. For most of us, I’d wager each recording has something we could call “authenticity,” the feeling that the music touches on some form of, well, truth. In short, our prized records take us beyond mere music to bring us to a place that’s larger than ourselves. At least mine do.

Guy Davis’ new recording, “Be Ready When I Call You,” possesses that ability. Davis, the son of actors and civil-rights icons Ruby Dee and Ozzie Davis, offers a blues- and folk-tinged record that combines superb musicianship, courtesy of drummer Gary Burke, guitarist John Platania, keyboardist Professor Louie and bassist Mark Murphy, with some sharply targeted, hard-edged political and cultural commentary. Thankfully, Davis succeeds in avoiding the dreary sanctimony we often associate with protest music, chiefly by playing things down the middle. On “Palestine, Oh Palestine,” for instance, Davis mourns the toll this conflict has taken on the common humanity of both Palestinians and Israelis. It’s a poignant lamentation on the price of an unyielding war, and in lesser hands it might have turned into simply one more diatribe against this or that group. But here Davis’ protest is against the senselessness of the whole sordid affair.

Several of the tunes on “Be Ready When I Call You“ relate to the terrible history of America’s wretched race relations, the most powerful being the folk-blues infused “God’s Gonna Make Things Over” that recounts the 1921 Tulsa Race Riots, the destruction of its Greenwood district, and the massacre of its Black citizens. “Though my people may be buried down in nameless graves / God’s gonna make things over one of these days,” Davis sings while accompanying himself with his plaintive harmonica. This is where Davis gives us a somber look at an irretrievably vicious chapter of our history that, until rather recently, was largely whitewashed and forgotten.

Not all of the album deals specifically in protest music. The one cover here is Howlin’ Wolf’s ”Spoonful,” and Davis turns out this old warhorse with a lethal groove — it’s a pure jewel. Similarly, “I Thought I Heard the Devil Call My Name,” with its percussive banjo setting its languid pace, easily transports us to a sidewalk in New Orleans. These tunes offer a respite from the historical struggles catalogued on this disk. As with most protest music, this is not an easy record to absorb, but it’s an important one that manages to transcend the genre. It pays off both musically and spiritually.

Badonkadonk Train / Got Your Letter in My Pocket / God’s Gonna Make Things Over / Be Ready When I Call You / Flint River Blues / Palestine, Oh Palestine / I Got a Job in the City / I’ve Looked Around / Spoonful (It’s Alright, It’s Alright)

Cedric Burnside – I Be Trying