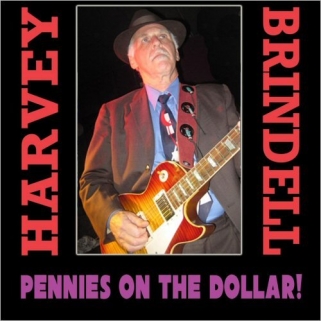 Pennies on the Dollar!
Self Release

Long before Harvey Brindell moved to the Northwest, he had made himself quite a reputation playing the blues in the Midwest. Rubbing elbows with world-renowned artists such as Magic Slim, Jimmy Thackery, Shawn Holt, Guitar Shorty, Mike Zito and numerous others, as well as being a regular act playing on the stage at Lincoln, Nebraska’s, famed Zoo Bar, Brindell has earned his rights to play the blues. That is certainly true listening to his first recording since arriving in Portland a few years back. There is an authentic Chicago-sounding delivery that purrs full of jumping blues.

Brindell hooked up with a number of friends that he met over the years mixing a collection of original songs at Jimi Bott’s Portland studio, Roseleaf Recording. The talented friends Brindell brought into the songs include the likes of John “Honeyboy” Turner (who he used to record with back in the Midwest), Mitch Kashmar, JW Jones, Johnny Burgin and of course Bott.

The album itself is sensational with not a sore spot to be heard anywhere. It flows with exceptional playing from all, especially Brindell’s guitar work and vocals. “Pennies on the Dollar” opens with a bouncing beat as Brindell explains the tribulations of working for next to nothing when it is all said and done, the true life of a musician. “The Old Zoo Bar” is a tribute to the renowned club that has hosted the greatest blues artists during its 50-year history, with Brindell naming several. “Short Flight” is a nice tuneful instrumental, while he lets you know of his adoration for his old stomping grounds in a couple of tracks about Omaha. Brindell definitely has a knack for turning a phrase blues-wise as he does repeatedly. A favorite personally is “Mississippi Medicaid” with a humorous take on “alternative” medicine only found in the South that just might include a few unorthodox ingredients like a black cat bone, mojo hand, John the Conqueror root and a little gris gris, too. But honestly, this album hit it quite enjoyably start to finish. Well done!

Joyann Parker – Out of the Dark