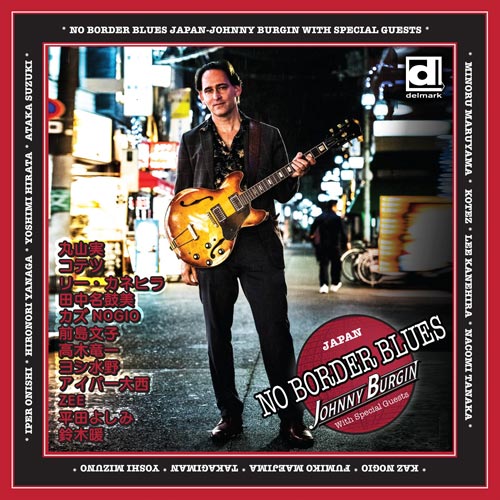 If you take a look at the touring itinerary that Johnny Burgin carries on a yearly basis it surely shows what a road dog he really is. Whether touring with well-known Chicago musicians such as Billy Boy Arnold or on his own with local musicians thrown together, Burgin always brings forth the tastiest of Chicago-based blues. You wouldn’t expect anything less from somebody who has been such an impact on Chicago’s scene as he has himself. And it may be a surprise to many, that fact also comes across with the bands he puts together while touring Japan.

Japan has long been addicted to the blues. Perhaps birthed during the 1970s when artists like Jimmy Dawkins, Eddie Taylor and Otis Rush made their way through the country. Burgin has collected a handful of Japan’s most talented blues artists and listening to them perform you just may believe that you’re sitting in Kingston Mines or Rosa’s listening to a Chicago-based band rather than half-way around the world in Osaka. Players such as guitarist Yoshi Mizuno, bassist Zee Yanaga and drummer Takagiman handle a number of the tracks, with Lee Kanehira (Cash Box Kings) also laying down killer piano riffs. Burgin appears on guitar on all numbers and vocals on four, while others like Kanehira, Nacomi Tanaka, Kotez, Iper Onishi and Kaz Nogio fill in their voices throughout the disc.

The song selections filling this recording are more than exceptional. There’s a lot to take note of, including Burgin’s own composition “Old School Player” as well as pieces written by John Brim (“Rattlesnake”), Carey Bell (“One Day You’re Gonna Get Lucky”), Tampa Red (“Sunnyland”) and Robert Johnson (“Sweet Home Chicago” reworked under the title “Sweet Home Osaka”).  The nearly six-minute instrumental “Samurai Harp Attack” features the trade-off performances of three harmonica masters in Onishi, Nogio and Kotez that is not to be missed as is Little Walter’s “I Just Keep Loving Her” sung in Japanese as “Mada Sukinanda.” Don’t be surprised if you start singing along with the latter.

If you haven’t paid attention to blues artists from other locations around the world, you just may not know what you’re missing. No Border Blues is a great place to start digging into world blues. And Johnny Burgin is the perfect leader to bring us all along.