Richard Wilkins – What A Life (Self-Produced)

Greg JohnsonPosted on May 30, 2019 Posted in CD Review 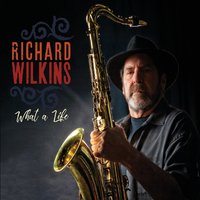 What A Life
Self-Produced

For many years, Richard Wilkins has been a vital part of the Portland area blues scene, leading bands, laying down dynamic bass beats, and blowing killer saxophone. Yet, even though he has performed for so long, he’s just now releasing his debut recording, What A Life, and it is well worth the wait.

In the liner notes, he reminisces about a past moments onstage with Muddy Waters, Eric Clapton, Buddy Miles, and James Cotton — a true pinch-me-is-this-for-real moment for anyone. Now, fast forward to the present. He’s laid down tracks with another top tier group of musicians including Kevin Selfe, John Mazzocco, Jimi Bott, and Ed Neumann. Recorded at Bott’s Roseleaf Studios, the band assembled a fantastic selection of tracks written by a handful of Wilkins’ influences, such as Hollywood Fats, Willie Dixon, and BB King, plus four of his own compositions. You have here the makings for an outstanding recording and it certainly is all of that. They kick serious butt!

When you can surround yourself with talented friends and create tasteful music of this caliber, you just have to agree: “What a life!”