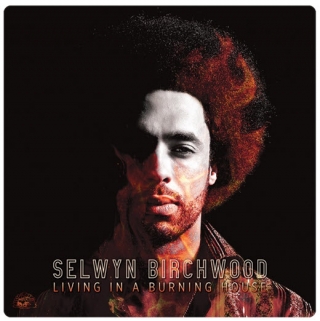 Selwyn Birchwood’s one of those kind of musicians, quite rare nowadays, whose music always manages to sound sharp and interesting. His third release on Alligator Records, “Living in a Burning House,” deftly blends blues with rock to create an edgy and aggressive miscellany of sturdy, rough-hewn tunes.

In 2013, Birchwood won the Blues Foundation’s International Blues Challenge and also took home the Albert King Guitarist of the Year award. Recently, the Blues Music Awards nominated Birchwood for Best Contemporary Blues Male Artist, and this new album utterly validates that nomination. Birchwood’s guitar playing here is simply combustible and his voice possesses a coarse authenticity and smokey weariness that embellishes the earned anguish of his music. Although, I must admit, the occasional clichéd lyric does annoy—“serious as a heart attack” is a bit shopworn—but Birchwood’s honest rendering of his music redeems any quibble one would have with it’s lyrics. This album is all about finding redemption, or something close to it, through music.

Two tracks stand out on the album. First, “You Can’t Steal My Shine” is a rocking stomp of a song that features some of Birchwood’s best, fiery guitar work on the album, and the title track, “Living in a Burning House” which offers up that nagging question that many blues tunes have tried to answer: what does one do when he “smells smoke” and fears his house has been set aflame, only to realize there’s no way out. Highly Recommended.

I’d Climb Mountains / I Got Drunk, Laid and Stoned / Living in a Burning House / You Can’t Steal My Shine / Revelation / Searching for My Tribe / She’s a Dime / One More time / Mama Knows Best / Freaks come Out at Night / Through a Microphone / Rock Bottom / My Happy Place

News from the CBA Board of Directors May 2021