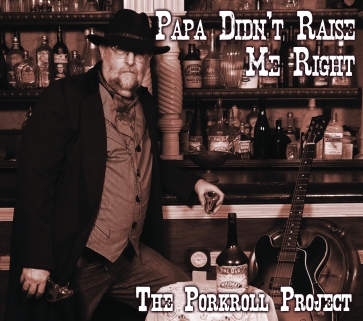 When I was 12 years old and transitioning from classical flute to the sphere of electrified instruments, my older brother brought home a copy of “Led Zeppelin II.” It was a defining moment in my musical life as I heard Jimmy Page and John Paul Jones thrashing out the opening riff of “Whole Lotta Love.” My 12-year-old self might have described it as making my brain feel all tingly, but my modern self would describe it as my basilar membrane bouncing around like a trampoline, resulting in sensory information being relayed to my auditory association area.

In any case, I felt something similar when I heard the opening notes of “Papa Didn’t Raise Me Right.” It caught my attention, not like a slap in the face, but more like a stolen kiss. Subsequent listens still made my hair stand on end. Neil “Porkroll” Taylor is a superb frontman, a quadruple threat who is not only a guitarist, composer and vocalist, but a legit pitmaster to boot. And damn, I’m hungry for some slow cooked blues.

While the stories in the lyrics are thematically blues-oriented, they’re refreshing and original. Like I ordered a shot of tequila, but it came with a cinnamon rim and an orange wedge instead of salt and lime, I’m excited rather than disappointed.

“Mama Put the Gun Down,” “Better You Than Me” and “Nothin’ Yet” are well crafted originals, but the standout for me is the title track. The cover of The Coasters’ “Down In Mexico,” featuring David Renz on saxophone, is another notable evocative track to take you South of the Border. Recorded at Noisy Little Critter Studio in their home of Philadelphia, if you like electric guitar-driven blues with a harder edge – which I certainly do – you are going to love this album.

“Papa Didn’t Raise Me Right” never mentions the act of sex, yet throughout the album I am constantly thinking bow-chicka-bow-chicka-bow! It’s got just the right amount of funkiness, and just the right amount of nastiness in these grooves, to make me think it’s lovin’ o’clock. My favorite part of the artwork is the disc itself, featuring a slice of porkroll with a few bites taken out. You have to dig a band with a sense of humor.