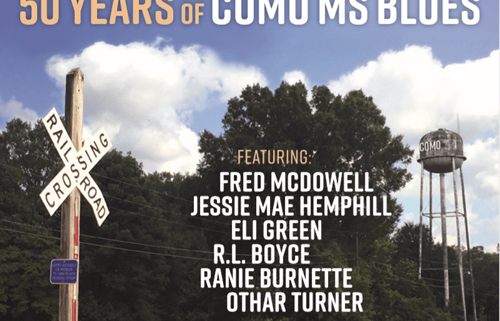 Wolf Records International recent compilation album, “50 Years of Como MS Blues,” serves as an excellent primer for anyone who’s interested in learning more about the foundations of North Mississippi Hill Country Blues that flourishes in The Magnolia State. Its nineteen cuts include performances from Jessie Mae Hemphill, Fred McDowell, Ranie Burnett, Eli Green, Othar Turner, and R.L. Boyce, and every tune is splendid. What often sets Hill Country Blues apart from traditional Delta Blues is its reliance upon a repeating, one-chord percussive arrangement, rather than the latter’s more recognizable twelve-bar, three-chord melodic structure. This creates a mesmerizing groove—the popular phrase today to describe Hill County Blues is “hypnotic boogie,” which works for me; I can find no better label. And this CD is packed with nothing but that hypnotic boogie.

The album also includes several unreleased recordings, three by R.L. Boyce, two by Ranie Burnett, and one each by Jessie Mae Hemphill and Othar Turner, and these songs are the quill, especially Boyce’s renditions of “Baby Please Don’t Go” and “Lonesome Road.” There’s an extraordinary, nearly overwhelming, authenticity to these performances—a distillation of bleak pain and bitter suffering into seductive and compelling music. “Lonesome Road” in particular offers an interesting juxtaposition with Junior Kimbrough’s version of that song from his album “Meet Me in the City.” While both Boyce and Kimbrough’s versions fit recognizably into the Hill Country tradition, they’re effective markers for the stylistic variety inherent in this tradition. Kimbrough’s tune revels in its distorted rumble where Boyce’s version is less aggressive, more organic and plaintive.

With so many musical genres tending to fuse nowadays (is it blues rock or rock inspired blues?) it’s refreshing to find this music in its pure form, played by musicians for whom music was not so much a way to make a living, but a way to make a life, or at least make life make sense. This album chronicles an important slice of American music history that deserves wider recognition. Highly Recommended.

50 Years of Como MS Blues is available from Austria through Wolf Records (https://www.wolfrec.com/produkt/50-years-of-como-ms-blues/), but may be difficult to find in The States. I have it on good authority that it’s also available on Spotify.

Ranie Burnette: I Wonder Why / I Call My Baby / I’m Goin Away / Moonshine Blues / Come On Baby