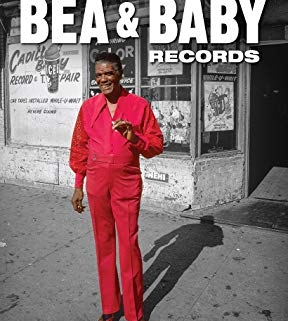 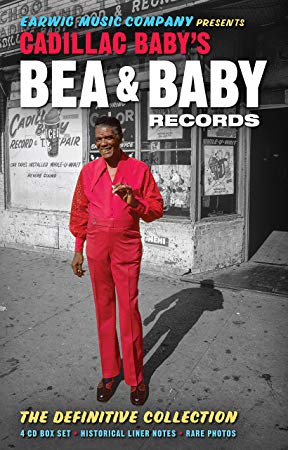 When calling out the great blues labels of Chicago from the late 1950s into the ‘60s, you’re naturally going to name Chess, Cobra, Delmark and Vee Jay. But Bea & Baby Records, the city’s first black owned independent label, put down on vinyl some of the biggest names in the blues. Run by Narvel Eatmon, better known as Cadillac Baby, Bea & Baby Records had a thirty year run of recording from 1959 to 1979, though it saw some hard times throughout the span.

Earwig’s Michael Frank befriended Eatmon in the ‘70s, with the two working with a young rapper named 3D. Frank eventually purchased the label’s catalog in 1991 in order to preserve its history, and that has turned out to be a blessing with the release of this extensive 4 CD set covering a wide selection of music, including the aforementioned blues, early rap, as well as gospel, and R&B. It also includes an in-depth 128-page hard-covered book with rare photos and history of the label.

There are occasional stories told by Eatmon scattered about the collection. But what is really the prize here is the music itself. Many of these tracks have long been lost and rarely heard. And the line-up is more than impressive, with names such as Earl Hooker, Eddie Boyd, Sunnyland Slim, James Cotton, Hound Dog Taylor, Sleepy John Estes, Homesick James, Andre Williams, Little Mack Simmons  and Detroit Junior among many, many more. It is basically a slice of history well worth given a second chance. One can find lots of gold nuggets here.

Tommy Castro & The Painkillers – One of America’s Favorite Live...