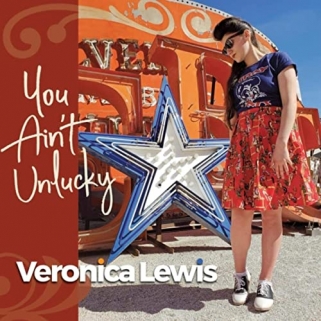 Listen to a few bars of a Veronica Lewis song and you just might begin to believe in reincarnation. How else could a 17-year-old play 1950s-style boogie-woogie and blues so convincingly?

Whatever else you want to think, take this as gospel: Her debut album, “You Ain’t Unlucky” – set for a Feb. 19 release – is a sparkling dash of energy that feels pretty refreshing after a winter like this.

Lewis’ three-piece combo (she sings and plays a rip-roarin’ piano, while Don Davis slips in some spirited sax and Mike Walsh delivers on drums) has rolled out a real-deal record in the tradition of old-school recording sessions.

“I imagined I only had one shot to lay it down in the studio,” Lewis says, “as if I walked into a recording studio somewhere back in time, like Sun or Stax, and the producer just pressed the record button and said, ‘OK, kid, let me hear what you’ve got.’ ”

Here’s what she’s got: a smooth, rangy voice with a twist of vibrato that belts out six original songs and a couple of tributes to two of her heroes, Louis Jordan (“Is You Is My Baby”) and Katie Webster (“Whoo Whee Sweet Daddy”).

The album opens with the title track’s no-nonsense advice to cheer up and not feel sorry for yourself.

“It might not feel good, but that don’t mean it’s bad,” she admonishes. “Lemme tell you, it’s just another one of those things.”

But Lewis is just getting started.

“Ode to Jerry Lee” is a raucous salute to another of her influences, Jerry Lee Lewis, while her take on “Is You Is My Baby” takes a dusky tone – Lewis shows the versatility of her voice as she conveys the loneliness and insecurity of a worried lover.

Her “Put Your Wig on Mama” is a groover that Lewis wrote for her mother — apparently Mama had better get ready for a loud, sweaty night on the dance floor.

And “Clarksdale Sun” simmers with the knock-you-down heat of a Southern scorcher.

Throughout the recording, Lewis’ keyboard drives the sound, interacting naturally with her voice and Davis’ sax. Walsh’s backbeat keeps the sound tight.

Nope, nothing unlucky about this album at all. This one’s all talent and heart. It’s a keeper of a debut.

With any luck, we’ll be hearing a lot more about Veronica Lewis from now on.