Is it just me, or are summers in Portland getting warmer every year? And by warm I mean hot!! Well that summer heat is not going to end with the calendar when it comes to the hot music going on in this city and you can always rely on the Cascade Blues Association to bring the heat the first Wednesday of every month at our general membership meeting.
We’re going to start September off with one of our favorite acoustic duets, Julie Amici. They were the CBA’s solo/duo entry in the International Blues Challenge in 2018 and the rave reviews about their performances and their recording Yellow Roses continue to stream in. The duo is made up of vocalist Julie Yanko and bassist Dean Mueller. The name is derived from Julie’s first name, and “Amici” the original family name of Dean’s father. Much like the name is a melding of the two, the music is much the same, combining Julie’s country roots and childhood dreams of singing jazz, with Dean’s deeply rooted blues foundation. 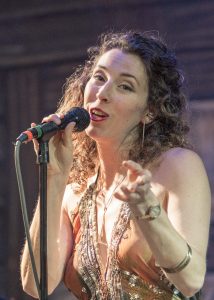 Julie’s strong yet sweet voice is reminiscent of the 50’s when female singers ruled the world of music, a time when jazz and blues co-mingled at the height of popular culture. Her repertoire combines the jazz of Billie Holiday with the soul of Nina Simone and the sophisticated country of Patsy Cline. Dean’s bass playing is rooted in the blues chops he earned playing with some of the finest blues legends in America and touring with the award winning international act, The Insomniacs. The pairing of a vocalist and upright acoustic bass is a magical combination that leaves nowhere to hide. It is a setting reserved for the most qualified artists, a mingling that Julie Yanko and Dean Mueller bring together with unexpected delight. Described as “a fresh take on a bygone era that is intimate, alluring, and hauntingly beautiful,” Julie Amici is the right way to start off a new month.

For the second set of the night we’re going to take the musical taste down to the sounds of the Gulf Coast. Rich Layton & The Troublemakers are the house band at the crossroads of twang and tremolo. They pump out a high octane blend of swampified honky tonk blues that sounds like Saturday night in an East Texas roadhouse. It’s music that keeps the dance floor packed and the liquor flowing.

Together more than a decade, the band has released two albums and have performed at multiple festivals and events throughout the NW, including the Safeway Waterfront Blues Fest, The Bite of Seattle, Sunbanks Blues Festival and many more. Each year, Rich joins Lyle Lovett as a special guest when Lyle tours the NW, and he has also played with friends Lucinda Williams, Teresa James & The Rhythm Tramps, Dale Watson and the late zydeco great Stanley “Buckwheat Zydeco” Dural jr as they travel through Portland. 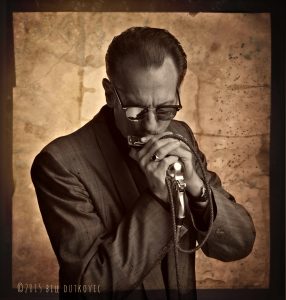 Rich is a multiple Muddy Award nominee for harp and is featured along with LaRhonda Steele on the title track of Rae Gordon’s 2017 Album of the Year, “Better Than I Was.” The band has a new album in the works for release later this year, but plans to preview a few of the new songs at the monthly meeting. The band is made up of Rich Layton on harmonica/vocals, Larry McCoy on guitar/vocals, Eric “Haus” Krabbenhoft on bass, and Charles Pike on drums/vocals. Step on to the dance floor with the band as they’ll tell you “There’s no parole for Rock & Roll!” And they’re going to prove it with tons of fun.

It’s always a great choice to come out to the CBA general membership meeting each month, where you know that you’re going to entertained with exciting music and sharing the night with good friends. Plus your chance to win prizes just by being in attendance. Hope to see you all there!