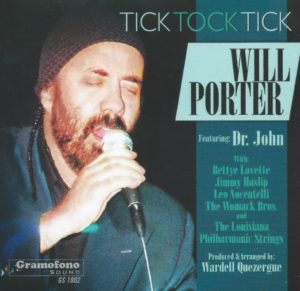 The first release by Will Porter, 2003’s Happy, was produced by the legendary New Orleans master Wardell Quezergue, and it featured a number of stellar musicians. The album received high praise despite low distribution, and it was soon realized that a second recording should be in the works. Over time Porter’s silky-smooth vocals have been heard working with a number of artists and he has himself been behind the scenes alongside longtime friends like Dr John, Leo Nocentelli, and Jimmy Haslip. Many recordings for Porter’s follow-up project were put together throughout the years while working with Quezergue and yet it still took another five years after the producer’s passing in 2011 to finally get the mixes and production just right to be unleashed upon the public. But without question, that wait was certainly worth the time. Tick Tock Tick is an astounding collection of ever so sweet vocals combined with the right musicians to perfection.

The album opens with the title track, one of the two Porter and Dr John collaborative pieces, and it melds the very distinct opposite vocal styles of the two friends. It is a funky little piece that also shows just how diverse in approach this recording truly is. Much of these differences in sound is the product of whoever happens to be accompanying Porter on an individual number, and that in itself is quite impressive to say the least. Whether it is a ballad like “Why Do We Get Blue?” with The Yellowjackets’ Jimmy Haslip, a Bob Dylan number, “Make You feel My Love,” sung with Bettye LaVette, or any one of the songs where The Womack Brothers join him on vocals, such as Ike Turner’s “I’m Blue (Shoo Be Do)” or the gospel inflected “Everything’s Gonna Be Alright.” Unfortunately like Quezergue, both Curtis and Bobby Womack have passed on prior to the release of this disc.

Aside from those already mentioned, Tick Tock Tick is packed full of great musicians adding their impact to the quality of this album. They inlcude Tower of Power’s Mic Gillette, The Meters’ Leo Nocentelli, Johnny Bamont from Huey Lewis & The News, even The Louisiana Philharmonic Strings.

But when it is all said and done, it is Will Porter himself who shines above all else. He possesses the kind of voice that only rarely comes around. It is highlighted on every single number included, but especially stands out on “Don’t Go To Strangers.” His baritone voice will melt your heart. It comes across with strings in the background as a classic love piece that you may expect from other enriched vocalists the likes of Lou Rawls, Johnny Adams, or Bill Withers. Yes, Porter ranks right in that same class. Tick Tock Tick is a soul masterpiece, a fitting tribute to the genius of the late Wardell Quezergue and shouts to the world that Will Porter will be heard — so listen up now!

Tick Tock Tick / Why Do We Get Blue? / When The battle Is Over / Make You Feel My Love / I’m Blue (Shoo Be Do) / This California Sun / I Can Do Bad By Myself / Don’t Go To Strangers / Treadin’ Water / Tear It Up / Everything’s Gonna Be Alright