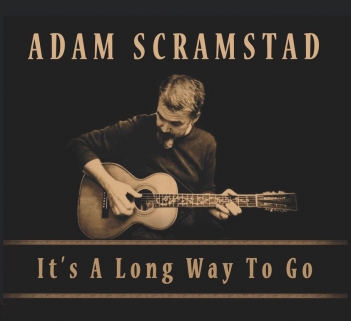 The one thing you need to remember when it comes to solo acoustic musicians: Nobody else is playing alongside you to hide if you happen to make a wrong note or some other mistake. Of course, those can always be mended inside the studio during editing.

But you need not worry about anything like that when you’re talking about, or more so listening to an artist like Adam Scramstad. Each note, every time he picks up his instrument, is always spot-on perfect.

It takes meticulous practice to create this perfection. And if you’re throwing in your voice singing your material, too, it also has to be right on target. And again, Scramstad is right there. His voice sounds like a second instrument accompanying the music. Exactly as it should be.

It has been a long time since his 2006 debut release, No Sun Around Blues, but rest assured he has not been idle during those years. Working on his music and playing with friends, he has put together a new disc that proves he is an artist ready for worldwide attention. That disc, It’s a Long Way to Go, easily stands among the absolute best acoustic blues and Americana releases. Simply said, it’s that good and more.

Scramstad’s songwriting is just as on par as his instrumentation. The songs are memorable and meaningful. The opening number, “Dreaming Of The Blues,” is a whimsical piece finding him in all kinds of favorable situations, only to wake up finding he was actually just dreaming. He closes the album with another great tune, “It’s Just Right.” Here he describes how everything in his life is just right because he has found the person who makes it all worthwhile.

There are a trio of cover tracks that give justice to the originals while still making them work as his own. These are Elizabeth Cotton’s instrumental “It Ain’t No Lie,” Willie Brown’s classic “Future Blues” in a duet with his longtime mentor Terry Robb, and Muddy Waters’ “Louisiana Blues” with Scramstad playing slide resonator, again with Robb and harmonica ace Dave Mathis.

Most of the selections are just Scramstad playing solo, giving him the opportunity to show us just how spectacular his string work shines, whether fingerpicked or slide. Take note of this on the instrumental “Transitor Radio,” a piece that brings to mind guitar greats like John Fahey and early Leo Kottke. A piece like “In Memory” is the exact example of how his voice works as a second instrument. Other guests include harp player Ben Small working as a duo with Scramstad on “Hot Rod Tracy.” And the Terry Robb Band with bass master Dave Captein and drummer Gary Nolde bring a jazzy note to “Sad & Lonely State Of Mind.”

Perhaps my favorite track of the album is another instrumental, “Blues Bring Hard Times,” again played on the slide resonator. This song sounds so right in performance, it feels like it is taking you to a completely different place where you are alone with the guitarist and his notes are hypnotizing into a soothing, relaxing zone that feels so right

It’s a Long Way to Go may have taken a while to be completed, but for what is delivered here, it’s just right and more. This is a master work from one of the best acoustic musicians to be found. And I repeat one of the best anywhere.

Ramblings On My Mind – 2020 in Review and What Lies Ahead

Bob Margolin – Star of Stage and Screens
Scroll to top