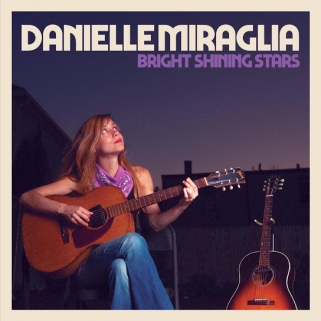 If Danielle Miraglia says she can walk through barbwire, outrun the hound dogs or give a shining star a new home, we’re inclined to believe her. The Boston guitarist and singer, whose fifth album is becoming her most successful (it hit No. 15 on the Billboard Blues Charts) has just released an acoustic collection that we can’t get out of our heads.

We’re not sure we want to, either. Putting her own subtle twists on traditional classics like “C.C. Rider” and “When Things Go Wrong (It Hurts Me Too),” covering Janis Joplin’s “Turtle Blues” and Bob Dylan’s “You’re Gonna Make Me Lonesome When You Go,” and adding some fresh new compositions of her own, she’s tied together an album that’s tough as rawhide, but smooth as blended whiskey.

Her website bio says she holds a “strong steady thumb on an old Gibson and an infectious stomp-box rhythm.” Her music says she embodies the best of Bonnie Raitt, Etta James and Joplin herself. By turns, she’s playing blues with elements of country, folk, roots and rock.

She gets some help from Laurence Scudder (a member of Boston-based Glory Junkies band) on viola, Peter Parcek on guitar and Rich “Rosey” Rosenblatt on harmonica. But Miraglia’s talents carry this one.

Her versatile voice is riveting, and her lyrics are spellbinding — chilling sometimes.

Take these menacing lines from “Pick Up the Gun,” for example:

I pray every day

I don’t need to repent.

It’s no sin if it’s self-defense

Gimme a reason to shoot.

Or this line from “You Can Love Yourself:”

When nobody loves you

This a recording that’ll have you hitting the repeat button repeatedly — it’s a work to savor, share with your friends and then listen to all over again.

And it’s one that makes us eager to see what Miraglia will come up with next, because it sounds like she’s just getting started.

Sounds Like Home / C.C. Rider / You’re Gonna Make Me Lonesome When You Go / Pick Up the Gun / Turtle Blues / Famous for Nothin’ / You Can Love Yourself / Meet Me in the Morning / When Things Go Wrong (It Hurts Me Too) / Walkin’ Blues / Bright Shining Stars

Dave Keller – You Get What You Give
Scroll to top