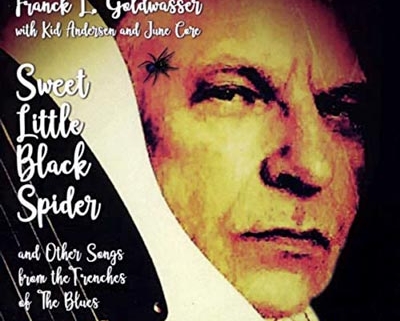 There’s a lot of history behind Franck Goldwasser’s tenure as a blues musician. From his arrival in Oakland from Paris, he has proven his craft as more than just another guitar player noodling around with the blues. No, that is putting it rather mildly. He drew the attention of his blues heroes from the start and became one of their own during his years in the Bay Area. He has always been true to the sound he learned from listening to and playing alongside those musicians — which is more than evident on this new release, “Sweet Little Black Spider and Other Songs” from the “Trenches of the Blues.”

To remain true, he went into perhaps the finest blues studio to be found on the West Coast, Greaseland Studios, along with two of the most renowned bluesmen in the country, Kid Andersen and June Core. A true blues power trio, they laid down nine tracks live in the San Jose, Calif., studio, all Goldwasser originals. It’s contemporary blues that feels like it could’ve been cut years ago by either West Coast or Chicago-based greats, with the output that can last for years to come. Songs like “Bring Me My Forty-Five” and “You Made The Wrong Choice” fall right into this mode. Goldwasser puts forth his political stance with “Tyranny Is Rising” giving no doubt of his feelings. On the instrumentals “Blues For Eddie Hazel,” “T.S.O.B.C” and “Nosluf’s Last Laugh” the guitar work is sensational, paced perfectly and complemented by the rhythms of Core and Andersen. Hell, the whole disc is a work of art when it comes to the collaboration of these guys. Or as Kid Andersen states in the liner notes: “This shit is real!” Authentic blues at its very best.

But it doesn’t end there. A second disc is included with Goldwasser telling stories of his past encounters with people like Charlie Musselwhite, Cool Papa, Sonny Rhodes, Robert Lockwood Jr. and others with bluesy background music to each story. These memories are just as entertaining as the over-the-top music presented on the first disc and adds an extra piece of credo behind his place in the blues world.

This is an over-the-top package. Highly recommended and just the thing you’ve been looking for as a blues lover.

Bring Me My Forty-Five / Tyranny Is Rising / Don’t Say You’re Sorry / Sweet Little Black Spider / You Made A Wrong Choice / She’s Hip! / Struggle In My Hometown / Blues For Eddie Hazel / Don’t Give Up On Me, baby / T.S.O.B.C. / Evil Wind Blowing’ / Nosluf’s Last Laugh / Tyranny Is Rising (Lowdown Version) / The Day I Met Sonny Rhodes / Larry Blake’s, Memphis Charlie and Nick the Greek / Kasper’s and the Blues Barrels / The Last of The Oakland Juke Joints (Cool Papa and the Deluxe Inn) / East Bay Guy / Robert Jr. and the Superfly Coat / The Mystery of the Trash-O-Caster / Ikey Renrut and Me

Robert Cray That’s What I Heard