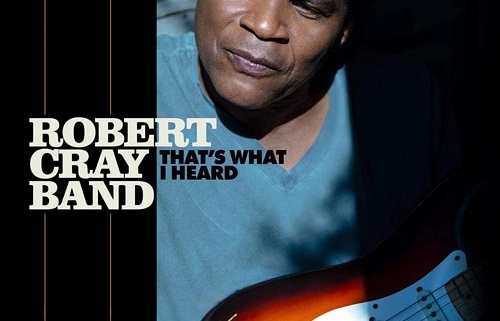 In tough times, a familiar face can be comforting. And the timing couldn’t be much better to see Robert Cray come back with some new music. The ageless Northwest icon and five-time Grammy winner’s latest, That’s What I Heard, came out at the end of February, just as the coronavirus pandemic was seizing the country by the throat and shutting down every music joint in town.

A few doses of That’s What I Heard should put you right, though — it’s clearly just what the doctor ordered.

This time around, the 66-year-old Cray continues his longtime collaboration with producer and percussionist Steve Jordan, bringing in longtime bandmates Richard Cousins on bass and Dover Weinberg on keyboards, along with new drummer Terence F. Clark.

The team’s a natural fit, and they waste no time getting after it.

From the driving first track, “Anything You Want,” Cray’s signature vocals and guitar loop easily through another classic case of a love hanging by a thin guitar string.

The soulful “Promises You Can’t Keep” enlists backup vocals from Steve Perry, while “Do It” gets a little more done with some guitar help from Ray Parker Jr.

And Cray’s signature blues and lyrics run deep in “Can’t Make Me Change” and “A Little Less Lonely,” which includes the classic line: “It may not be love, but I think it will do.” He also defies aging with his own “I’m Hot,” which he explains laughingly this way on his website: “I’m old, but I’m hot.”

As usual, Cray makes it all look easy, smoothly blending blues, R&B and a sip of soul into a satisfying mix. Original songs fit seamlessly with covers recorded or written by the Sensational Nightingales, Curtis Mayfield, The Impressions, Billy Sha-Rae and Bobby “Blue” Bland. “Promises You Can’t Keep” enlists backup vocals from Steve Perry, while “Do It” gets it done with some guitar help from Ray Parker Jr.

It’s a reminder of happier times, a glimmer of better ones yet to come.

Cray, who lives in Southern California these days, has come a long way from his 1980s days in Eugene, playing dimer nights at hangouts like The Place or other Northwest clubs. But his unmistakable sound has aged as well as his still-smooth face.

That’s What I Heard is his 20th studio album in 40 years. Cray calls it “Funky, cool and bad.” We call it good medicine.