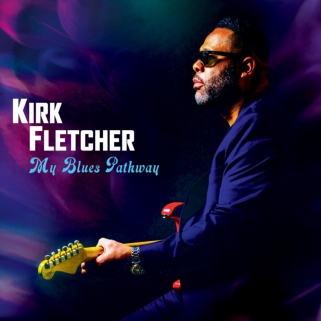 If you were to sit down and ask people about who they felt were the most impressive guitar players in the blues world today, you just might find a long list at hand. But more than likely, you’d find Kirk Fletcher’s name prominently on most of those lists. He garnered attention while working with bands like The Fabulous Thunderbirds and The Mannish Boys, but if you heard his last previous disc, Hold On, you’re already aware that he has a lot to say on his own. My Blues Pathway confirms this. Whether Fletcher is performing his own material or covering somebody else’s songs, he delivers with soulful vocals and stunning guitar work. And it comes across with his own passionate signature performance on each.

He is joined by Robert Cray bassist Richard Cousins for the recording, who also lends a hand in writing a couple of songs, “No Place To Go” and “Love Is More Than A Word.” The rest of the band behind Fletcher includes bassist Travis Carlton, keyboardist Jeff Babkos, drummers Lemar Carter and David Kida, plus horn work from Joe Sublett on sax and Mark Pender on trumpet. The album closes with Fletcher teaming up with harmonica legend Charlie Musselwhite and guitarist Josh Smith on the acoustic number, “Life Gave Me a Dirty Deal,” written by Juke Boy Bonner.

Six of the 10 pieces are originals, with the remaining covers being Sonny Boy Williamson’s “Fattening Frogs For Snakes” where Fletcher shines on his guitar with a song written to showcase Sonny Boy’s harmonica;  Chris Cain’s “Place In This World Somewhere;” and AC Reed’s “I’d Rather Fight Than Switch.” His self-written numbers are exceptional as well. Standout offerings include his tribute to one of his guitar heroes, Denny Freeman, “D Is For Denny;” heartbreak in “Heart So Heavy;” and the autobiographical “Struggle For Grace.”

Kirk Fletcher is destined to become one of the renowned masters of blues guitar if he isn’t there already. The Hold On album reaped numerous nominations for various awards. My Blues Pathway follows right along in its footsteps and beyond. Expect more accolades coming Kirk Fletcher’s way here.