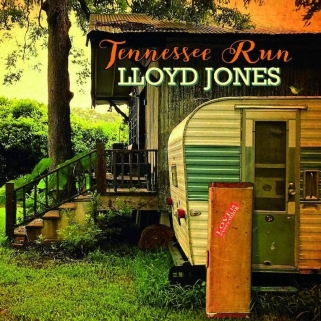 Lloyd Jones has been a frequent guest on Delbert McClinton’s Sandy Beaches cruises over the years, and has made some awfully important friends on these trips. One of those is keyboardist Kevin McKendree, who has performed with a literal who’s who in the music scene, is a renowned songwriter and also owns one of the very best recording studios in Tennessee. So when offering Lloyd the opportunity to record his latest tracks at Rock House Studio in Franklin, he made the run to Tennessee and laid down some of the finest music of his career.

Lloyd describes his music as “Swampified Americana,” transversing the American musical landscape from Memphis to New Orleans, Nashville, the Delta and Portland. It is filled with Lloyd’s soulful vocals, spot-on guitar work and lyrics that are catchy, fun and heartfelt. It doesn’t hurt that the album also features a number of the very best musicians from Music City, many from McClinton’s band. Delbert makes a guest appearance as does Teresa James, and Gary Nicholson adds his pen to the composition “Bayou Boys,” co-written with McClinton and Lloyd. Lloyd’s longtime Portland fans will be thrilled to see the inclusion of Reinhard Melz on percussion, LaRhonda Steele on backup vocals and horn charts for the song “A True Love Never Dies” by the late Glenn Holstrom.

The fun on this album never lets up. From the upbeat first track, “You Got Me Good,” followed by the equally bouncy “Me & You” there isn’t a moment of pace change until you reach “A True Love Never Dies.” Funkiness prevails on numbers like “Bayou Boys” and “Dilly Dally.” And on “Where’s My Phone?” humor takes center stage as he searches for his lost cellphone, only to locate it in the last place he’d imagine – come on, we’ve all been through this experience ourselves, admit it.

In a career that has spanned 50 years, Lloyd Jones proves once again that he is one of Portland’s masters of blues and R&B, soulful to the core with a guitar style that punctuates his music, giving it that instant recognition. Why he isn’t far better known throughout the world is a crime. With this release on a major blues label, VizzTone, perhaps the time is here to turn around that wrong. Outstanding album, Tennessee Run is going to play through your mind for a long time to come.

You Got Me Good / Me & You / I Wish I Could Remember Loving You / Where’s My Phone? / A True Love Never Dies / Bayou Boys / Everybody’s Somebody’s Fool / Turn Me Loose / That’s All I Want / Love Is Everything / Chicken Bones / Every Time We Meet / Dilly Dally / Chevrolet Angel