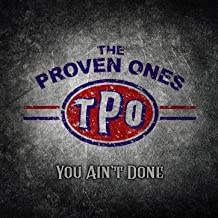 “You Ain’t Done” is the second recording by today’s freshest and one of the best blues-rock supergroups, The Proven Ones. Falling in the paths recently paved by acts like Southern Hospitality and Royal Southern Brotherhood, the combination of highly recognized musicians teaming together blends the individual expertise of each member to form a nicely constructed flow and presentation. Guitar mastery from Kid Ramos, keyboard wizard Anthony Geraci, tight rhythm section Willie J Campbell and Jimi Bott, with the perfect vocalist to enhance this band in Brian Templeton. All are respected with multiple accolades for their accomplishments over the years. Horns provided and arranged by Chris Mercer and Joe “Mack” McCarthy just add extra drive and flavor to the mix in all the right ways.

The band’s debut  album reaped a Blues Music Award nomination for Best Debut that blew the gates open for this release to rise up the charts immediately upon release. The new album was recorded at Gulf Coast Records, under the direction of Jimi Bott and Mike Zito, who also guests on the album on acoustic guitar and background vocals on a handful of songs. Other notable guests include Ruthie Foster on a stunning duet with Templeton on “When My Soul Loves” and background vocals on several tracks by LaRhonda Steele.

Musicianship is at an extreme as is to be expected. Barrelhouse keyboards from Geraci on “Already Gone” and impressive slide and rock guitar chops from Ramos on numbers like “Get Love” and “Nothing Left To Give” stand out. The album’s overall selections are diverse, with unique sounds that feature a little psychedelic, country, soul and even Latin approaches. But it’s all blues-rock done in its highest form. “You Ain’t Done” is an impressive example of a combination of artists working together as you’d dream about, all come to actual life.