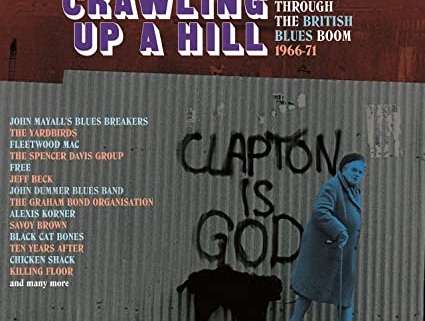 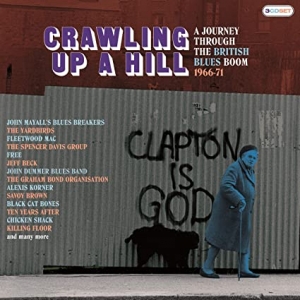 This is an extensive look at the British Blues scene beginning with the release of John Mayall’s Bluesbreakers with Eric Clapton and pushing through an eclectic mix of bands that were all performing their take on the genre. It’s definitely not the first compilation of British Blues, but it is the first to offer an overall look that is not aimed at a specific label such as the prominent Blue Horizon which is still represented by Fleetwood Mac, Chicken Shack, and Duster Bennett. Within its fifty-six tracks it covers a blend of rocking numbers, country blues, covers of well-known American originals, and a touch of psychedelic, which considering the time frame, should be expected. There’s even a little humor thrown in with The Bonzo Dog Doo Dah Band and the Liverpool Scene.

Because the collection offers only one tune from each artist, there’s a good variety of music here and plenty of the performers on this three-CD collection will be familiar right off, including Savoy Brown, Free, Spencer Davis Group, Taste, Alexis Korner, Graham Bond Organisation, Jeff Beck, Status Quo, Ten Years After, Jeremy Spencer, Bloodwyn Pig and Stone The Crows. And you’ll find many of the future heroes of British blues and rock scene playing in outfits before becoming huge stars: Robert Plant, Rory Gallagher, Christine Perfect, Gary Moore, Dave Edmunds, and the band Quiet Melon who was basically an early version of The Faces. And it should be noted that the acoustic performances from highly successful acts in their homeland like Ian A. Anderson, Jo-Ann Kelly and Mike Cooper are more than exceptional.

Packaged in a small box, there is a 40-page book that offers background about each of the included acts in order of their appearance on the discs, plus a little history about the British music scene of the time in England and Ireland. Much of what is found is truly hard-to-find on their own, so it makes a good deal here indispensable. It is a well put together collection, thoughtfully covering a period of time with acts that explored and pushed the boundaries of the blues and set the feel for what a good deal of British music was to follow.