You are here: Home1 / Band Stand
Modern Blues, Americana and Roots Songwriter & Performer
Jody Carroll is a blues & Roots performer and songwriter who effortlessly creates bold interpretations of old Blues and American Folk music, his own songs, stories and improvisational musical journeys. He is a Finger style/slide guitar master and amazingly soulful singer blending flavors of old Blues, Folk, Mountain music, Jazz and Rock all together into a true power packed gumbo.
JC Has toured with or shared the stage with legends such as Buddy Guy, Honey Boy Edwards, Jack Owens, Louisiana Red, R.L Burnside, Johnny Winter, John Mayhall, Roy Rodgers, George Thorogood, Derek Trucks & Susan Tedeschi, Leo Bud Welch, Robert Cray, Roy Rodgers, Eddie Kirkland, Robyn Trower, John McEuen , Ural Thomas, Charlie Musselwhite, Canned Heat, Robert Earl Keen, Sonny Landreth, Shameka Copeland, Paul Geramia, Sonny Landreth, Roy Bookbinder and even members of Metallica once back in 1987 (strange story).
He appeared to great critical response at Merlefest 2018.
From there to here:
Jody Carroll McMurrian was born on April 5 1968 in an area called the San Joaquin Delta of California. It’s a vast water filled area where the Antioch River, the Old River, The San Joaquin River and the Sacramento River all meet up to pour into the San Francisco Bay. His family hails from the hills of Buffalo Valley Oklahoma via Arkansas on his father’s side and Amarillo Texas on his mother’s side.
Jody Carroll grew up hearing whispers of old American music on the radio or from his fathers guitar. His father started him off with a couple Willie Nelson songs and plenty of AM country radio. His grandfather, who also played guitar when he was young, had come from the remote rural Buffalo Valley hills of Oklahoma 20 years earlier with his family in tow. He and his brothers had been running whiskey in those hills one to many times and had been effectively asked to leave the state by the law. JC’s grandfather left town and made his way over to California and then up to the bay area for work in the ship yards of Port Chicago. Jody grew up in the 70’s and 80’s working on the families Northern California farm, building barns, riding horses, drawing, learning music from old blues, folk, Rock and Soul records.
His first guitar was his father’s steel guitar that had languished for many years up in the attic until he found it. After secretly playing it for a while, he asked his father to teach him some old folk tunes that he had played in his early years and some lap slide licks. He took to it like a fish devouring all he could learn from the family record collection. After many years of playing in garage rock bands, he happened upon the Harry Smith Anthology of American Folk Music and the recordings of Robert Johnson. That sealed the deal as it where, he took off into the backwoods of old weird America and never looked back.
“A new blues artist we now can’t live without….Jody Carroll, whose textured blues and other roots were dark and haunting…..If there is one artist who embodies roots music to its fullest, it has to be Jody Carroll”
No Depression, Amos Perrine 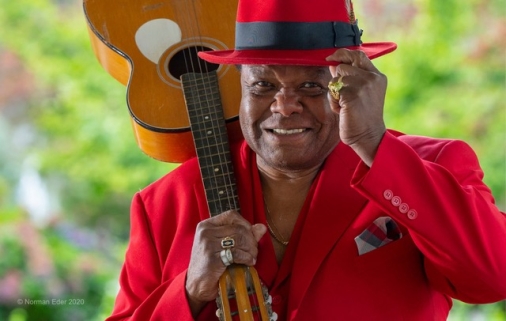 Greetings from the Norman Sylvester band!

As we are hopefully approaching a new phase of our COVID-19 experience (I called it Coronaville), I want to express my appreciation for all of the ways our music community showed up for each other!

My band, due to our ages and other variables, only performed live during the outdoor concert season last summer, but many artists bravely continued to perform with venue owners. BRAVO for everyone’s tenacity to figure out safe ways to provide live music.

Music helped many of us get through some challenging times, whether in person or virtually, and I want to THANK the musicians and event planners who provided entertainment. Those who did the work to keep the CBA going and those still representing our special Blues Association also deserve our praise.

And keeping things going after Greg “Slim Lively” Johnson fell ill is a tribute to him and the sacrifices he made for this organization.

As for my band … we’re still standing! We have bookings starting in May and are hopeful that “this good feeling” lasts forever. Boogie Cat misses everyone, but also wants health and safety for each person at the upcoming shows.

Do what feels the safest for you and yours with no judgment as we move and groove forward. I’ll probably be wearing my mask and practicing protocols when socializing. Playing the blues for you will be my healing force.

They say this pandemic “has changed us forever,” but I believe it gave us the perfect opportunity to give each other grace of empathy, understanding and acceptance.

The Norman Sylvester band can’t wait to get out there and party with amazing fans, friends and fellow musicians!

*check us out for BOOKINGS & SCHEDULE; WWW.NORMANSYLVESTER.COM 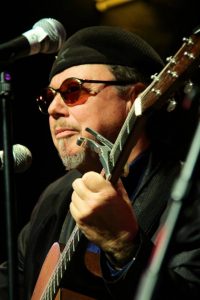 After 30 years of touring and recording with this band, a precious cassette “Live At The Emperor’s Chambers” came to light just as best friend, keyboard player, genius music director/arranger Glenn Holstrom was about to succumb to cancer. Though Glenn and Bobby “Housewine” Roden have passed, their brilliance lives on vividly this night. It has been my honor and pleasure to work with such a punishing band! Makes me smile to hear these cats stretching out on these tunes. I think you’ll smile too. Please join us in this celebration and take home this treasure. — LJ 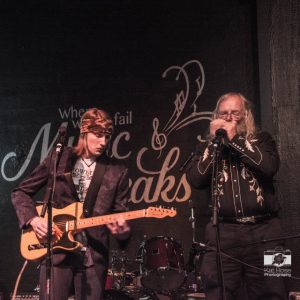 Louis and the Geezer are quite honored that the judges picked us to represent Cascade Blues in Memphis as your duo. We had to miss our opportunity to perform at the Waterfront this year ’cause we were bringing Blues Music to our veterans at their Freedom Festival on the 4th of July. Ironic, because I’ve entered the IBC competition more than anybody else over the years, trying to get a slot at the Festival, so we REALLY wanted to be there. So it goes. Looking forward to some fundraisers for our Memphis trip along with Johnny Wheels and the Swamp Donkeys. Louis and I are honorary Donkeys, and together it’s a helluva 7 piece band so stay tuned. Don’t miss out “Fridays from the 5th Wheel” music series. We’re very proud to represent Cascade in Memphis and, as a previous semi-finalist, I think we’ll do very well this winter. yers…Froggy 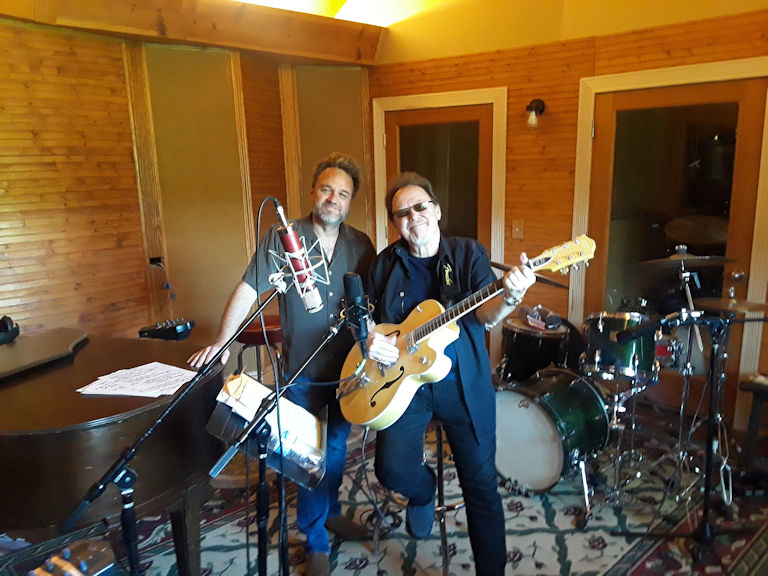 Yes indeed, I’ll be playing at the Waterfront Blues Festival solo at 1pm on July 5 (at the Crossroads stage) and later that same day at 3pm on the riverboat as a guest with the Bayou Boys! Workin’ me like a rental car but I don’t mind a bit.

Even more exciting is the release of a recently discovered powerful “live” recording of the Lloyd Jones Struggle, featuring the brilliance of the late Glenn Holstrom and Bobby “Housewine” Roden.

Like a freight train at full force, this stunning limited release will be available at the Music Millennium booth during the festival.

Through the gracious support of this wonderful music community (and Kickstarter) I am returning to the Rock House in Nashville to put the horns and vocals on our latest project. It’s a busy time!

My thanks to everyone, 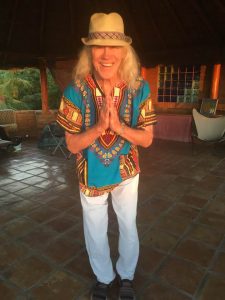 Hola! I want to thank everyone who turned out to celebrate the 8th anniversary of the Sunday Bolt Upright Jam at Montavilla Station this past June 30th. Special thanks to my co-hosts Kirk Bryant and Silky Manuel Meyers for holding down the jam the past two winters while I grooved in Baja! This jam is very fun and is on-going. Also, I’m wide open for gigs as a drummer and vocalist this summer and fall. Contact me on Facebook and at clashbolt@gmail.com. It’s great to be back in Portland!

Hi, Friends — my big news this month is the release of my new CD “Stuff You Gotta Watch.”  This 18 song disc has been in the works for some time and was recorded onto analog tape by ace producer/engineer Ron Rogers. This is mostly acoustic blues along with a few electric tracks with Craig Snazelle playing upright and electric bass. Mary Flower adds her considerable vocal and guitar skills on three tunes.

We are having a CD Release Party on Saturday, June 15 at the Corkscrew Wine Bar in SE Portland from 8 to 10 pm. Craig Snazelle will be playing bass that night along with special guests Ken West, Ron Rogers and maybe a few surprises. Come on down.

If you can’t make it that night you can pick up the new CD and all my previous CD’s at my gigs, Music Millennium, or by mail via CD Baby. Downloads can be had at iTunes, Spotify, Amazon mp3, and you can hear my music on Pandora.

Hope to see some of you out and about this summer. If you need some good acoustic blues for your event please get in touch with me via my website.

Hey CBA Friends, I’m very excited to announce my new album and release concert – with discounted tickets for CBA members! Friday, March 8 at 9 p.m., join me at The Secret Society Ballroom for the Confessin’ My Dues Record Release Show presented by NiaSounds and the CBA, where I will be joined onstage by renowned jazz musicians Gary Hobbs and Dave Captein, whose skillful playing is featured throughout the album, and rising blues guitarist Adam Scramstad. I’m very excited to present this all-star line-up together on stage for the first time. Use promo code CBA19 to get your discounted advance tickets at secretsociety.net or terryrobb.com.

I hope to see you there!

Howdy Y’all! The band and I are celebrating our new album “Salvation Road” with a big party on Saturday, March 23rd at 9pm! We’ve invited our friends Sister Mercy to join the fun, along with some surprise guests. Every ticket includes a copy of “Salvation Road” or ”Diamonds” from Sister Mercy. Your choice at the door! We’ll be rockin’ the historic Secret Society Ballroom, a venue with just a touch of elegance, great sound, lights, dance floor and bar, plus parking across the street. We are going to retire The Troublemakers name that night, too, and take the stage as Rich Layton and Tough Town. New name but the same swampadelic grooves you count on us to deliver. Thanks for the continued support from you guys – the mighty CBA!